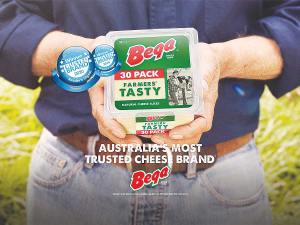 A long-running trademark dispute between Fonterra and Australian dairy giant Bega Cheese has ended with the court last month rejecting both parties’ claims.

The Victorian Supreme Court ruling means Bega Cheese can continue selling cheeses and peanut butter under the Bega brand. It rejected Fonterra’s claim to an exclusive trademark licence for the brand within Australia.

The court rejected a counterclaim from Bega to terminate the trademark licence agreement with Fonterra for alleged breaches.

Fonterra and its predecessor, the New Zealand Dairy Board, have had long trading ties with Bega Cheese. The original agreement was signed in 1983.

The current agreement, signed in 2001, gives Fonterra long-term licence to use the Bega trademark on butter and cheese – blocks, slices and stringers.

The stoush started in 2017 when Bega Cheese bought the Kraft branded cheese and peanut butter business from Mondelez International. Subsequently, the Australian dairy manufacturer replaced the Kraft logo on these products with its own Bega logo.

Fonterra initiated court action, arguing that it had exclusive rights to the Bega brand. The court disagreed.

In its counterclaim, Bega argued that Fonterra had breached a contractual obligation to market and promote the Bega brand. However, the court found there was no obligation for Fonterra to do so.

Bega also contended that Fonterra breached an agreement between the two companies by misrepresenting to consumers that all cheese in Bega products were made in the Bega Valley. That claim was also dismissed.

Fonterra Australia managing director Rene Dedoncker told Rural News that it was pleased with the decision allowing the NZ co-operative to retain the exclusive licence for the Bega cheese brand for cheese and butter.

“Since the 1980s, Fonterra and its predecessor Bonlac have nurtured and built the Bega brand, and supported Bega Cheese Limited to grow and provide good returns back to its farmers, shareholders and community,” he says.

“We will continue to invest in the Bega brand because we believe in it.”

Dedoncker told Rural News that while disappointed with the decision on the trademark claim, Fonterra is confident that it can work together with Bega Cheese Limited to continue to grow the value of the brand.

In a statement to the Australian Stock Exchange, Bega executive chairman Barry Irvin said his company is now entitled to use the Bega trademark on products outside the scope of the agreement with Fonterra.

“Since its acquisition of the Mondelez grocery business in 2017, Bega Cheese has sold Bega branded peanut butter products.

“Bega Cheese is pleased that its right to use its brand on these products has been confirmed by the court.”