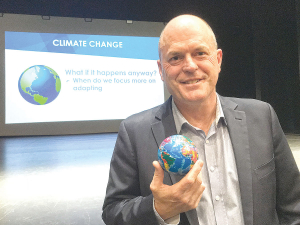 OPINION: I commented recently on the tension and anxiety around our rural kitchen tables as our farmers grapple with the pressures this Government is piling up on their family businesses.

Over the last few weeks we’ve seen this further added to by the Government’s freshwater proposals and unacceptable consultation process.

To explain why I need to paint a scene typical in rural New Zealand: a farming family, rivers and streams fenced, in some case wetlands created, cowshed effluent captured to be reused on farm as a fertiliser if you are a dairy farmer.

You model your impact year on year on the surrounding environment to demonstrate improvement. You are working alongside other farmers to improve your catchment. You are making a difference, your local stream values are improving.

Then along comes David Parker from an office in Wellington, with a raft of new measures and onerous nitrogen reduction targets which under current conditions won’t be feasible to achieve.

Our farmers are not the enemy in the water quality conversation. They are the people who will be implementing the solution. The rural sector is sick of being ostracised and demonised by this Government.

At present, neither the consultation process nor the language of Government ministers indicate there is any intention to negotiate or partner with landowners in finding a workable solution. No matter where you sit on the matter, this rigidity and lack of stewardship is unacceptable.

The rural constituency is an important group of stakeholders, the most financially impacted on an individual level, yet they are being branded environmental vandals for attempting to explain their position.

The Government gave just six weeks for consultation (extended to a mere eight after farmer pressure) during one of the busiest times of the year and it set up just five meetings across the entire country which are farmer friendly.

The documents provided for farmers to wade through have no economic analysis. In fact the Government’s own report says the modelling done on what this means for farming is ‘very limited’.

Interestingly, Local Government New Zealand has done some modelling on the reforms. Their modelling focuses on our very productive Waikato/Waipa catchment and shows sheep and beef farming is expected to fall by 68% while dairy would be reduced by 13%. Plantation forestry blocks would boom by an astonishing 160%, covering up to 50% of farmland in Waikato.  Is this really the outcome New Zealand wants?

Above all this is the startling reality that the Government’s own freshwater quality monitoring data shows that in its monitored sites more are improving than deteriorating.  It is disingenuous to frame resistance to these changes as being pro environmental degradation. Far from it. Water is one of our nation’s critical assets, perhaps second only behind our people. It must continue to be improved, but our farmers must be able to lead the way.

What is disingenuous, if not straight out destructive, is to frame up our improving water quality trajectory as false, impose targets that can’t be farmed to, provide no economic analysis, limited the opportunity to give feedback and say you are working in the best interests of this country.