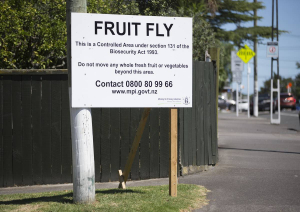 Controls on the movement of fruit and vegetables in the Auckland suburbs of Devonport and Ōtara have been lifted after no further fruit fly have been found there.

The decision follows several weeks’ of intensive trapping and inspections of hundreds of kilograms of fruit leading to the conclusion that there are no breeding populations of Queensland fruit fly in the Devonport area, or Bactrocera facialis (facialis) fruit fly in Ōtara.

Biosecurity New Zealand placed legal controls on the movement of fruit and vegetables in Devonport after a single male Queensland fruit fly was identified from a national surveillance trap on 14 February. There have been no further finds in Devonport.

Similar controls were placed in Ōtara after a male facialis fruit fly was found there on 18 February. There were two further finds on 21 February and 5 March in separate response surveillance traps nearby where the first detection was.

“We are satisfied that with no further detections, the Controlled Area Notices can be lifted today.”

“As a precautionary measure, we will be keeping in place an enhanced network of fruit fly traps in Devonport and between Devonport and Northcote, as well as in Ōtara, for an extended period. If fruit flies are present, these traps will detect them.”

The Biosecurity New Zealand signage and wheelie bins will be removed from the two suburbs over the next few days.

Biosecurity New Zealand and the country’s horticultural industries would like to sincerely thank the residents and businesses in the affected suburbs of Devonport and Ōtara.

“You’ve borne the brunt of this situation with the movement restrictions and regular checking of traps on fruiting plants in your gardens and we’re extremely grateful for your support,” says Duthie.

“I can’t stress enough how vital this work has been. This particular insect pest is a significant threat to our horticultural export industry and home gardens.”

The restrictions in place on the movement of fruit and vegetables and the current baiting programme in Controlled Zones in the North Shore suburb of Northcote remain in place.

The last Queensland fruit fly detection in Northcote was on 14 March and our operational response was stepped up.

“Our teams on the ground have been removing fallen fruit from backyards, inspecting compost bins, and placing bait on fruit trees to attract and kill adult flies, in particular females. The bait is made up of a protein to attract adult fruit flies, and a very low concentration of insecticide to kill the flies. It’s similar to how people bait wasps in their backyards.”

“The baits are toxic to fruit flies. We have taken every precaution to make sure the baits are safe around people and animals. They are not harmful to bees,” says Duthie.

Detailed maps of the controlled areas and a full description of the boundaries, and full information about the rules are at: www.biosecurity.govt.nz/fruitfly

A University of Otago study has found that the Government's response to the 2017 Mycoplasma bovis outbreak inflicted significant and lasting trauma on farmers whose stock was culled.

The director-general of MPI has praised the dairy industry saying its performance in the past year has been tremendous.

Revenue from primary exports is predicted to reach a record high of $49.6 billion in the next 12 months - all being equal.