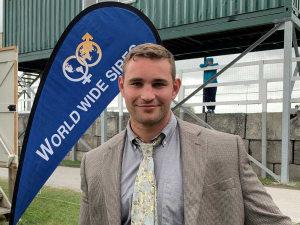 Gordon Fullerton is off to play rugby in the US.

Gordon Fullerton, 22, who grew up on his parents’ dairy farm near Te Awamutu, has been signed by Old Glory DC.

He’ll relocate to the US this month and will be based in the nation’s capital, near the White House.

“This is my first professional rugby gig. There are quite a few unknowns, but I’m really excited,” said Gordon.

“It’ll be great just to focus on rugby for a bit and test the boundaries, although it will be hard been away from the cows.”

Gordon has been playing premier-grade rugby in the Waikato for the Te Awamutu Sports Rugby Club.

Old Glory DC competes in a national competition and will clash against teams from Texas, California and New York in 2020.

His parents own Woodcote Holsteins, one of the top producing Holstein Friesian herds in the country.

Gordon has spent the past two years working for LIC as a genetics specialist.

“It’s a diverse role which I’ve really enjoyed,” he said.

“I’ve been able to travel all over the country and visit some impressive dairy farms.”

“Talking with passionate dairy farmers not just about their cows, but also their farming businesses, has been a bonus,” he said.

Gordon faces a long drive if he wants to milk a dairy cow in his new home.

“The closest dairy farms will be a couple of hours drive from Washington, or in the neighbouring state of Pennsylvania,” he said.

“I plan to visit a few dairy farms while I’m over there. It’ll be an interesting learning experience and good for the soul,” he said.

Gordon might be a rising talent on the rugby field, but he’s also gaining national recognition in the cattle show ring.

He also took out the World Wide Sires all breeds junior judging competition at Stratford A&P Show this month.

“I’ve been judging since I was a teenager. I enjoy going to shows and watching dairy cattle in the show ring,” he said.

“Judging is quite a skill. You have to be able to confidently articulate why you have placed one animal before another.”

“We’re looking for a functionally sound animal with a strong udder and sound feet and legs to help her live longer and be more production,” he said.

Talking into a microphone in front of exhibitors and a large crowd has delivered unexpected benefits.

“It’s helped me get better at public speaking.”

“It’s always useful if you’re in a situation where you’re outside of your comfort zone and you can talk your way out of it,” he laughed.

Gordon’s contract in the US runs until June 2020, which he hopes will be extended.

America's biggest milk producer, Dean Foods, has filed for bankruptcy and is planning to sell assets.