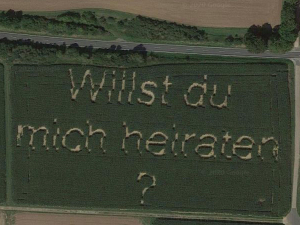 32-year-old part-time farmer Steffen Schwarz wrote the words “willst du mich heiraten?”, translated as “will you marry me?”, into his cornfield last year.

The message intended for his girlfriend can be seen on Google Maps here.

According to local news outlet hessenschau.de, Schwarz did not intend on the private message making it onto Google Maps.

Schwarz says he only recently discovered his proposal had been captured be Google Maps when his aunt in Canada sent him a screenshot.

The proposal was originally only seen by his and his girlfriend’s eyes.

Schwarz sent up the proposal by telling his girlfriend he thought he had seen wild boar in the cornfield.

He asked his girlfriend to look over the field with a drone to check for the boar.

But instead of boar, Schwarz’s girlfriend found a romantic proposal.

The couple plan to marry in June.