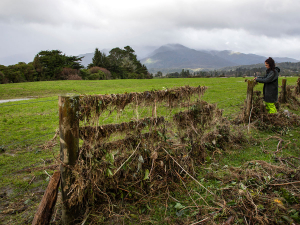 The Government has added an extra $10 million to fund an infrastructure recovery programme in the Buller region to help support the district recover from severe flooding. Photo Credit: Jules Anderson Photography.

An extra $10 million has been announced to fund an infrastructure recovery programme, bringing the total Government recovery package for Buller to $100 million.

“This additional funding will help Buller District Council to restore damaged infrastructure including repairing Westport Port wharf and flood protection reinstatement, dredging the Buller River, and helping flood-hit communities to get back on their feet,” McAnulty said.

“It’s an investment that will help the region to get beyond basic recovery and into a phase of longer term resilience, which is important given the increasingly frequent and severe weather events caused by climate change.”

McAnulty says the work underscores the importance of the Government’s proposed National Adaptation Plan, which looks to support communities to adapt to the impacts of climate change, as well as a review of local government to support them into the future.

“The funding goes beyond the Government’s usual financial support arrangements due to the unique set of circumstances faced by the Buller community, which lacks the resources and ratepayer base required for a recovery of this scale.”

“Buller has been dealt a rough blow with two serious flooding events in two years and I appreciated the opportunity to thank those who have supported their communities so well and to hear where the Government can continue to support the district,” McAnulty said.

Buller Mayor Jamie Cleine says the district's recovery from the massive flood, which tore through Westport and surrounding farmland, will be long and complex.