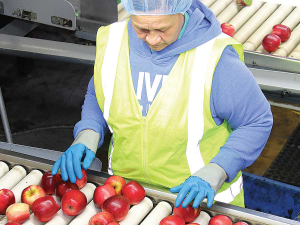 Paul Paynter says the current worker shortage crisis in the apple sector can be sheeted home to Government naivety.

He says when Covid-19 first hit the country – with many people losing their jobs and overseas workers stopped from coming to NZ – the Government was quick to claim it would provide an opportunity for Kiwis to take up jobs in the ag and hort sectors. However, he says while there has been some uptake, the reality has fallen well short of the enthusiastic expectations.

“It was just naïve optimism on the part of Government,” Paynter told Rural News.

He says people are not coming to the Hawkes Bay to pick apples for a number of reasons, the major one being the lack of accommodation. Paynter says there is a housing crisis in the region.

“The fact is people would prefer jobs in their own communities,” he explains. “If they came here they’d be leaving their friends and families and the security of their dwelling to come to pick apples for 12 weeks.”

Paynter says people were understandably worried about that, and about coming to Hawkes Bay for a job they may not like.

“So, there was all this uncertainty associated with it as well.”

Pay rates have been used as a reason for people not taking up the option of fruit picking, but Paynter says this is not the case. His pickers are paid a minimum of $20 an hour, but top pickers can earn over $30 – even $40 per hour if they pick more fruit.

He also points to the difference between NZ workers and RSE or workers from the Pacific Islands. He says Kiwis are understandably less motivated and on average work 43 hours a week, whereas the RSE workers who are in NZ for a limited time make the most of their stay and work an average of 54 hours per week.

Paynter says unemployment numbers in Hawkes Bay are somewhere around 2,000, but this should not be seen as an indicator of the number of people who can work.

“A lot of those people have challenges in their lives and we see that and try to employ some of them, but we have a relatively low success rate,” he explains. “It’s not easy and we don’t have the capacity to help them deal with all the problems they present with,” he says.

Interestingly, age doesn’t matter when it comes to pickers. Paynter says many older people are very fit and often terrify him as they climb up and down ladders.

“The oldest picker on site is 78 and I have a guy who is about 74, who every day is out-picking people a third of his age,” he told Rural News.

While the lack of pickers is causing stress to Paynter and his managers, there are other unknowns further down the track.

Covid-19 is always lurking as a problem waiting to disrupt. However, Paynter and his team have been through a lockdown once and are prepared for another one, should it occur. They have documented systems that can be quickly put in place and staff trained to deal with this. They have also bought new equipment to ensure social distancing.

They are also having to deal with the vagaries of the 23 markets they export to and where changes to the way his team handles product can change due to Covid.

In the meantime, for Paynter and his staff, the next few weeks will stressful, critical and uncertain as they try to get enough staff to pick and pack their apples.

Giving priority to Kiwi workers may be a nice political slogan, but - like many solutions that come out of the Wellington bureaucracy - it seems to fail the practicality test.

While there has been much talk in the mainstream media about the need for RSE or workers from the Pacific Islands, Paynter says it's the backpackers they miss the most.

He says before Covid, 50,000 to 60,000 backpackers made the difference between having and not having fruit picked.

Paynter says they were hungry for some work and would stay for a month or so, earning every dollar they could in that time. And when they moved on, a new lot rolled into town.

He says backpackers were not worried about accommodation because as long as they had access to showers and toilets they would camp on the orchards in tents or vans.

"We'd end up with a small bohemian enclave with up to 80 of them based around local orchards," Paynter told Rural News.

"In contrast, locals want a bed, and I don't blame them for that, but the reality is that there isn't any accommodation."

He says there is not quite the problem getting staff to work in the packhouse at Johnny Appleseed.

"The people who work there are those better suited and prefer working inside - as opposed to climbing up ladders in the sun and doing more physical work."

Paynter adds that the packhouse season is longer because they also process stonefruit and this is picked in mid-November and the operation runs through until the last of the apples are picked.

"So, we are well geared up in the packhouse in terms of rank and file staff but we are certainly short of people such as forklift drivers and quality controllers who are hard to come by."