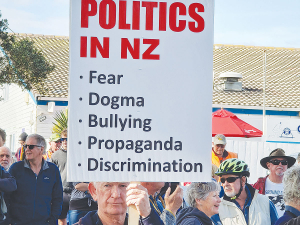 Groundswell is now turning its attention to farm emissions and the proposed HWEN solutions.

Rural ginger group Groundswell is mounting another campaign - this time against the He Waka Eke Noa (HWEN) proposals that farmers are being consulted on this month.

The group came to prominence last year, organising two major countrywide protests - one in June and the other in November - which saw thousands of people in towns and cities up and down NZ rallying against government policies aimed at the farming sector.

Despite attracting tens of thousands of people to its protests and many farmers joining it, Groundswell has been snubbed by the current political elite with both Prime Minister Jacinda Ardern and Agriculture Minister Damien O'Connor refusing to meet with its leaders and discuss their concerns.

Undeterred by this brush-off, the group is now turning its attention to farm emissions, a subject dear to the heart of the current government. It formed He Waka Eke Noa (HWEN) - a partnership between industry, Māori and government - and tasked it with finding a better solution to emissions management than the currently legislated Emissions Trading Scheme option.

Late last year, HWEN produced two draft pricing options for feedback, with these options due to be presented in February to farmers.

Groundswell NZ says it is preparing a list of key questions farmers should be asking during the round of consultation meetings being held over the next month or so.

The group has set up a website, enoughisenough.nz, run advertising, surveyed farmers, as well as calling for more farmers to join its campaign.

"We say that any emissions reduction scheme must be grounded in science, not politics," the enoughisenough.nz website states. "New Zealand agriculture adds little or potentially no additional warming to the atmosphere and any pricing mechanism must recognise this fact."

"Kiwi farmers should not be punished for being among the most efficient producers in the world."

It has also taken a gentle swipe at ag sector members of HWEN, saying that "it cannot be assumed that existing industry representation will always get things right".

Groundswell says HWEN needs to improve its accounting methods and ensure that farmers get the credit (carbon) they deserve. It has spelled out a number of conditions, which it says HWEN must consider. They include:

"This is our money and it should be used for purpses that benefit the industry, science, or the environment.

"It should not be siphoned for political slush funds."