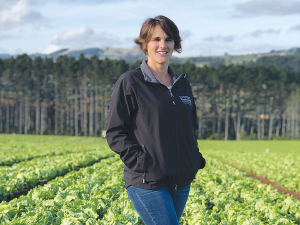 Pukekohe Vegetable Growers Association’s president Kylie Faulkner says many of her members are worried about new Government policies and fear they could be forced off the land.

Since taking over the reins at PVGA, Faulkner has been involved with two key pieces of legislation proposed by the Government: national policy statements on highly productive land and water.

Land and water are the backbone of PGVA’s 230 growers and their operations. They are no minnows when it comes to food production; a recent Deloitte report says while Pukekohe accounts for just 3.8% of the country’s land under fruit and vegetable production, it contributes to 26% of the nation’s value of production of vegetables, and a lesser proportion of fruit.

Faulkner is a director and compliance manager at Pukekohe-based Sutherland Produce Ltd, a family business founded by her father and grandfather. The family sold 50% of their stake to LeaderBrand in 2013.

She describes herself as a people person and loves the fresh food industry.

Faulkner believes PVGA members are at crossroads, as they await the Government’s policy announcements on highly productive land and water.

Many growers fear they could be forced out of business, she says.

Her members acknowledge there is a need for urban development but it needs to be done in a coordinated may way.

“Many growers don’t own land, they lease land….will landlords put up the prices if they are classified as highly productive land?

“Or will the new policies devalue land prices? No one knows which way it will go.

“Anxiety isn’t just around highly productive land; some aspects of the water policy statement are unworkable too.”

Two catchments in Pukekohe have been identified in the National Policy Statement on Water as risky. The use of fertiliser, particularly nitrogen (N), could be restricted in these catchments.

Faulkner says growers are worried about the impact on restrictions on N use on their businesses.

She gives the example of a grower, who is based at one of the two catchments and sometimes needs to apply extra fertiliser at the end of winter. He could face restrictions on N use.

“He would have to go out of business: he’s a fourth generation farmer and they have been farming there for over 100 years,” Faulkner says.

“You just cannot tell someone to pack up and go after that connection with the land.

“And who is going to buy the land; not another grower or dairy farmer?

“So there are a lot of unanswered questions…no one knows what the outcome will be.”

Faulkner says the past 12 months have been hectic. Growers have attended meetings and workshops to help craft their submissions to the Government on water and land use. Meetings have also been held with Government ministers and their officials.

She says growers remain hopeful because of the opportunity they’ve had to engage directly with ministers.

“Hopefully things which we have pointed out to them will be looked at and adopted.”

On water, they want to be part of solution to clean up the waterway. But policies shouldn’t impact food security.

“As a consumer and as a parent, I don’t want broccoli from China. New Zealanders have every right to have fresh healthy food at an affordable price.”