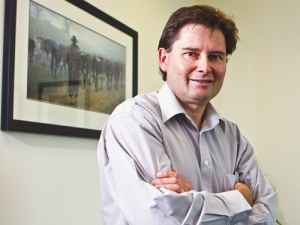 Halal is a big factor in the steady increase in returns for beef over the last 10 years, he says.

Egan says its value varies depending on the market and cut, but has assisted in giving farmers more for their stock, particularly as the exchange rate went higher.

He adds that secondary cuts, which 10-15 years ago would have gone into a grinding pack, are now turned into a product of value to customers in Indonesia or Malaysia.

New Zealand broke new ground on halal about 20 years ago through AgResearch in Hamilton. They developed electrical stunning to the head of the animal, knocking it unconscious and de-sensitising it to pain, but the animal still dies from loss of blood as required by halal, Egan told a conference of international journalists in Hamilton.

Greenlea has developed this market. It is very respectful of Muslim customers' requirements.

"Obviously we are tapping into a global demand base here, particularly in the regions we are very close to -- Malaysia and Indonesia -- where a large percentage of the growing Muslim population reside," he said.

Globally 1.6 billion Muslims make up 23% of the world's population, and the Muslim population is predicted to grow to 2.2b by 2030.

Greenlea has three guiding principles for halal: first, animal welfare -- the animal is unconscious, feels no pain and essentially is knocked out; second, worker safety – having the animal desensitised and in an unconscious state means it is not thrashing around; third, religious compliance -- protocols for the procedures required for Muslim countries.

Religious authorities in a number of Muslim countries have looked at whether it complies with their religious text. "Particularly the more moderate countries have come to the conclusion that this is acceptable."

But each country has its own religious compliance and it takes them time to reason through it.

He attended a Malaysian conference about two years ago with 750 delegates from 29 countries and it was clear there was a range of views on what constituted halal. "It is clearly an evolving area globally," he said.

But NZ has shown it is possible to comply with historic religious requirements and conform to generally accepted practices in the modern world.

"Some countries have taken longer but they still accept our product; they take a reserved position until they have taken it through their various avenues for approval.

"Over the last 20 years, stunning has become much more accepted as normal trade practice and it is seen as very much an NZ initiative."