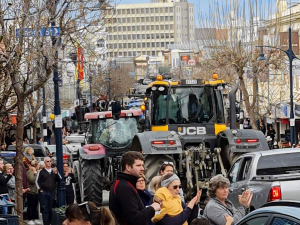 The Groundswell Protest in Timaru.

When asked why they believed this, many said farming leaders like Federated Farmers, DairyNZ, Beef+Lamb NZ and HortNZ are too quick to compromise with the Government.

Others said the leadership does not stand up strongly enough for farmers or were not consulting with farmers enough.

This week's poll follows on from this and asks:

Did you support the Groundswell NZ protest on July 16? Why or why not?

Go to https://bit.ly/3hQzNTO to have your say.