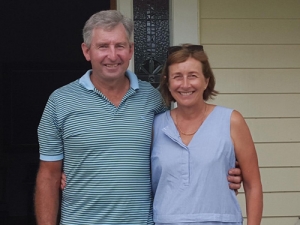 They said the Kidds are "environmental champions and great role models for drystock farming, achieving impressive stock and financial performance while working hand in hand with the environment".

Richard and Dianne, who have three adult sons, have farmed the flat to easy-rolling property since the late 1970s. They are assisted by long-time manager Jeffrey Bradly, who oversees day-to-day stock management.

The beef breeding and sheep breeding and finishing operation runs 4820 stock units on 331ha (effective), with a pine woodlot established on 18.5ha and 15.3ha of regenerating native bush.

"Richard and Dianne have been very pragmatic in their approach to protecting the environment for future generations on the farm," judges say.

All waterways have been fenced, and large areas of raupo act as sediment traps to capture nutrients. Shade, shelter and reticulated water are readily available to livestock in every paddock.

Biodiversity corridors link the upper catchment areas to the bush, and bush remnants have been planted with native species such as kauri, rimu and pohutakawa. Natives have also been planted in wetland areas, and the farm now has an abundant range of wildlife, including kereru and kaka.

The Kidds have a longstanding lease to graze 300 Angus breeding cows in the neighbouring Woodhill Forest from June until September. The cows thrive on the roughage, and the trees provide good shelter. Wintering the heavier stock off-farm helps protect soils.

Mixed-age ewes in Whenuanui's Coopworth flock lambed at 162 percent last year, with the hoggets achieving an impressive 129 percent. All lambs are sold prime to Countdown supermarkets under the "Kaipara Lamb" brand.

A range of crops are grown, including maize (for silage), rape, chicory with red clover, plantain and Pasja.

Judges said the winter stock policies, outstanding management of soils and extensive use of summer and winter cropping minimises the environmental impacts of the operation.

Whenuanui Farm is well thought-out and planned, they said. Richard and Dianne's key strength as a couple is "their vision and ability to plan and execute to achieve their goals".

The Kidds are well regarded within their local community and wider New Zealand, judges said, and their commitment to their community and agriculture is demonstrated by their longstanding and deep involvement in areas such as health, sport and education.

A BFEA field day will be held on Whenuanui Farm on Friday May 6, 2016.All members of the public are welcome to attend.

Winners in the 2016 Auckland Ballance Farm Environment Awards were: