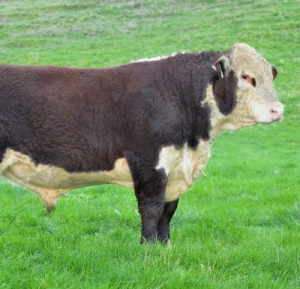 Orr who travels the country attending sales for all breeds has noticed commercial farmers are moving back to using registered Hereford bulls.
"Last year we started to see, and this year it has been confirmed, that some commercial buyers who have been buying black bulls have actually switched to buying Herefords."

Market prices have been strong with a lift in clearance rates and the average price also improving at the better sales.

"Generally speaking Hereford breeders have had a strong season, it's been a very good season" says Orr. "There have been clearances in most cases and overall it's been very pleasing for Herefords."
He felt there were a couple of drivers behind the swing back to Herefords.

He cites the production and performance gains of about 10% improvement that farmers can cash in on from hybrid vigour when using a registered Hereford bull over black cows.
"The resulting progeny are always keenly sought after," says Orr.

Orr also held the personal opinion that the Hereford breed had successfully encompassed increases in performance data but not at the expense of the cattle themselves.
Hereford bull, Okawa Major 2008 bred by David and Rosemary Morrow at Mt Somers fetched $55,000 selling to Kokonga Herefords near Tuakau. This is to date the top price across all breeds this sale season. The Morrows sold another bull for $44,000 to Orari Gorge Herefords. The Morrows average price was $8054.

This upwards trend continues from the exceptionally strong national show and sale for NZ Herefords at AgInnovation where the breed took out Champion of Champions honours and top price honours for all breeds at $40,000 paid for Hereford sire Okahu Sonny Bill.

The World Hereford Conference will return to New Zealand after a 30 year absence.

A milestone 55 years in the making was passed in a split-second: with one clamp of a tag punch LIC tagged its 10,000th sire proving scheme (SPS) bull calf.