Honey idea got him buzzing five years ago 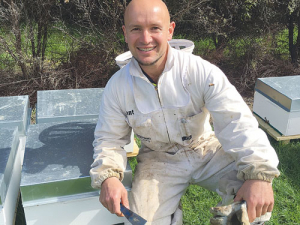 A lad from a dairy farm in Wairarapa has commercialised bee-keeping technology after a prototype invention won him the 2013 Fieldays Innovation Awards in the Launch NZ category.

Grant Engel is the brains behind Revolutionary Beekeeping, a mobile stainless steel harvester that enables beekeepers to extract honey straight from the hive, instead of transporting frames from hives to an off-site processor.

As a child visiting Fieldays, Engel was inspired by the inventions and new technology on show. He decided that one day he would return with an invention of his own.

Years later, after moving from Wairarapa to a dairy farm in Kerikeri, Northland, Engel saw the region’s focus on bees and honey and he started dabbling in beekeeping.

“I realised that taking honey away from the hive and processing it was much like getting a dairy cow and driving it to a shared facility where it was milked and then taking it back to a site; it didn’t make a lot of sense. I thought I could come up with something different.”

Engel invented a device to enable beekeepers to harvest honey by putting each hive frame through a machine quickly to extract honey, right next to the hive.

Says Engel, “The Fieldays Innovations Centre was always my first stop at Fieldays. I wanted to enter something so I could be on stage alongside all the other innovations that had inspired me -- my childhood dream.”

The Fieldays Innovation Awards show the latest developments likely to shape the future of farming and primary industries. Categories include grassroots ideas through to small-to-medium business product launches and international agribusiness innovations.

“A lot of the innovations I had been seeing were generally focused on traditional agriculture, so I thought something to do with beekeeping would be a bit left-field and new,” Engel said.

“Very little really looked at time-saving technology or innovation in beekeeping and honey.”

Engel’s innovation went on to win the Launch NZ category.

“Being able to launch the product at Fieldays put us on a platform. It allowed a lot of people to see our product, and ultimately winning the award took the business to the next level.”

Engel reckons the key to success with innovation is being passionate about what you do.

“I wanted to find a solution to a common problem; I knew we couldn’t keep doing things the way they had always been done.

“Even in the last 10 years much has changed in the honey industry. Our hives have just about doubled and biosecurity is much more an issue.

“The industry needs to be constantly re-visiting and re-evaluating what we’re doing to make sure we’re protecting our food producers and the sustainability of our products.”

Since 2015, Revolutionary Beekeeping has taken off. The business has hives and beekeepers from Northland to Canterbury; its supporters include Landcorp and the sustainable dairy farming fund Southern Pastures.

It has also expanded into collecting and brokering honey directly from commercial beekeepers, enabling them to make profit from their honey.

“Many families and young children attend Fieldays every year, and you see them walking wide-eyed through the Innovations Centre. It’s fantastic to think that Fieldays is inspiring the next generation of inventors.”