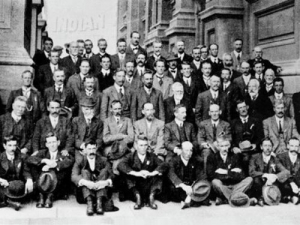 Today, Horticulture NZ celebrates 100 years of representing growers, with its foundations in the New Zealand Fruitgrowers Federation formed in 1916.

"Our focus is on uniting fruit and vegetable growers to give a strong and unified voice on matters related to our part of food supply in New Zealand and our export markets," Horticulture NZ president Julian Raine says.

"Looking back at the history of the organisation, there is very much a recurring theme of creating an environment where growers can innovate and grow and in doing so, contribute to the economy with jobs and exports."

When marking 50 years of the New Zealand Fruitgrowers’ Federation in 1966, the then Prime Minister Sir Keith Holyoake says: "The decision to provide an organised body to speak on behalf of the young industry has proved of great benefit to fruitgrowers. The addition of a trading side to the activities of the Federation has also been of very great help and the wisdom of this move is shown in the present extent and soundness of its operation." (Foreword, Fruitful Years, by Rex Monigatti)

Twenty-five years later the then Prime Minister Jim Bolger says: "As a nation we benefit from fruitgrowers’ intensive use of land resources and labour. In addition our people benefit from a health-giving food produced in New Zealand orchards." (Foreword, Fruitful Fields, by Rex Monigatti)

The then Agriculture Minister Jim Anderton says: "Horticulture plays an important part in the lives of all New Zealanders - what is our roast lamb dinner without our roast potatoes? What is Christmas without strawberries, apricots, raspberries and other seasonal fruit?"

Anderton says the merger was logical …"it is more efficient to deal with the representatives of one industry organisation, especially when we are working on issues that affect the whole industry".

"These words by prominent politicians over the past 50 years ring as true today," Raine says. "A single organisation has more clout and is more efficient to run.

"We are now following a vision of ‘healthy food for all forever’ and chasing a growth goal to double the value of the industry by 2020, to $10 billion. Horticulture is New Zealand’s fourth largest export industry and employs 60,000 people in New Zealand.

"Horticulture is an exciting industry to be part of, and progress over the past 100 years now sees us using the best in science and innovation to produce and promote fruit and vegetables that have a worldwide reputation for safety, quality, and taste."

Sensible regulations means making it work for all NZers

Horticulture's export revenue growth is likely to be about 10% in the current financial year – not the 3.8% forecast by the Ministry for Primary Industries.

A big future ahead

Age hasn't been a barrier for young vegetable grower of the year Austin Singh Purewal.