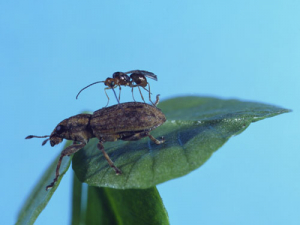 The wasp on a clover root weevil.

The estimates also show that the benefits of the introduction of the wasp by AgResearch to control the highly destructive clover root weevil are expected to continue at an ongoing rate of at least $158 million per year.

The total benefit of the biological control programme from 2006 – when the imported wasp was first released in an experimental phase – through to this year is estimated at at least $489m. This is based on reduced production losses on sheep and beef farms, and reduced use of urea fertiliser to compensate for damage from the weevil.

“It’s a fantastic example of how our science is making a real and profound difference to our agricultural sector and economy,” says AgResearch science team leader Alison Popay.

“It’s also a real success story in the continuing battle against pests on New Zealand’s farms.”

The clover root weevil is an invasive pest from the northern hemisphere that feeds on clover. It was first detected in New Zealand in 1996, and such was the damage it could cause, a 2005 study predicted estimated that without control, the weevil could cut farm margins by 10 to 15%..

The wasp injects its eggs in the adult root weevil, and the resulting grubs inside the weevil render it infertile. Once fully grown, the grub kills the weevil as it eats its way out. One wasp can kill about 85 clover root weevils.

“The wasp was so successful the team found that it reduced weevil populations by around 90% in monitored areas where the wasp is well established,” Dr Popay says.

A full case study on the programme can be read at http://www.mbie.govt.nz/info-services/science-innovation/performance/system-performance-report

AgResearch provides information and support in the management of pests through the website: www.agpest.co.nz