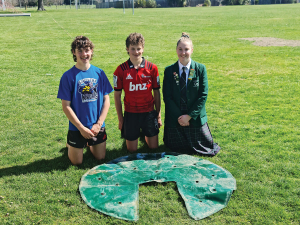 Hamish Ryall, Luke Jordan and Amy Hay with a prototype of their Flexi Mat FrostEase device, which is designed to stop water troughs from icing over during the winter.

Three enterprising Mackenzie College (Fairlie) students may well have come up with the perfect solution to an age-old problem of livestock accessing water from frozen troughs. David Anderson reports...

The trio of highschool inventors have developed the FrostEase Flexi Mat device, which is designed to stop water troughs from icing over - a real issue during winter in the Mackenzie Country and other parts of the country.

Year-12 student Amy Hay, 16, and her Year-11 colleagues Hamish Ryall, 16, and Luke Jordan, 15 - as part of the Young Enterprise Scheme (YES) - have invented the devie that is inserted into water troughs to prevent them from freezing over. All three students say they are keen to pursue careers in the agriculture/farming sectors.

Hay says the idea for the device came after her father challenged her and her teammates to come up with a way to stop freezing over as their YES project this year and it grew from there.

The trio did some research and found there were no such products on the market - although they had seen electrical water heaters used by farmers in the United States to prevent freezing. However, they concluded that such a device would not be practical in NZ.

"The FrostEase Flexi Mat has been especially designed so that animals - cattle, deer and sheep - can push the mat down with their nose, allowing water to come up through the milk bottle-lid sized holes," Hay told Rural News. "A number of prototypes are on several farms around the district being tested with different types of animals."

It is a circular-shaped bladder, which is constructed out of layers of outdoor grade canvas and plastic welded together. The current prototype is a multi-layered mat, made out of an industrial PVC canvas with a weldable bung that allows it to be filled with air. This is currently being made by local firm Kotuku Saddlery in Fairlie.

However, the team believes if the product does become a commercial reality, they will then have to find a manufacturer with size and scale to produce the quantities that will be needed.

"We would want this to be a local NZ company as we really want the benefits to come to this country, rather than to somewhere overseas like China."

The product is already attracting attention, with one company expressing an interest in the device as soon as it's completed. However, the trio believes it will need another season (winter) of testing and tweaking of the design before a final, commercial product is realistically available.

While it's too soon to know what the trough cover will retail for, the team hope it will be under $100 - which they believe is a reasonable cost for a product they expect will last 5-10 years.

The trio say they have been surprised and delighted by the interest shown from farmers in their idea. They believe it would have benefits not only in the Mackenzie Country, but Otago and other parts of the country as well.

One only has to look at the number of troughs dotted all over the countryside, when travelling across farmland to realise the potential that the FrostEase Flexi Mat has.

A Lot of Work!

Amy Hay, Hamish Ryall and Luke Jordan are all studying product design as an NCEA subject and signed up to the YES.

The scheme involves coming up with ideas that can be turned into a business while completing five different challenges to get NCEA credits.

The trio have a business mentor and say it is a lot of work - on top of their normal school lives.

"I can really understand why not many 16-year-olds start a business," Amy told Rural News. "However, the scheme has given us a lot of life skills, which we would not have experienced."

The one-year YES programme aims to give students an authentic learning experience that develops their entrepreneurial mindset and help build transferable skills.

This year, more than 4,700 students are taking part in Young Enterprise in New Zealand, creating more than 1,000 real-life businesses between them.