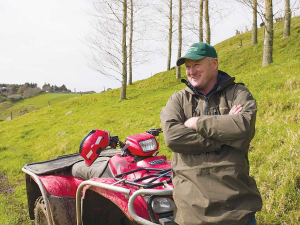 When he formally stands down as chairman at this year’s annual meeting, later this month, it will be from an organisation with 83 stores and $2.5 billion in turnover.

“So it’s been a big change and the organisation has become a lot more sophisticated over all that time,” Johnstone told Rural News.

“But in the end the thing that actually matters is the quality of your people and it’s been a privilege to work with so many great people in what is a fantastic industry. We’ll never get everything right but one thing I’m pleased about is we’ve always tried.”

Johnstone said the last year had been challenging in its market uncertainty, with farmers managing “to keep their wallets reasonably firmly closed”.

He says farmers, particularly sheep and beef farmers but dairy farmers also, when there’s uncertainty are very cautious about how they spend their money.

However, he is now confident Farmlands is in good order with commodity prices high and the industry tracking well this season.

Johnstone says the merger was “a real positive” and the highlight of his time with the organisation, as it provided a geographical spread from Cape Reinga to Bluff which helped significantly and bought some “scale”.

Reflecting on the fact that many of the large players in the industry of 30 years ago had either been rolled into others or no longer existed, Johnstone said the merger was a pre-emptive move.

“While there was nothing worse than two organisations having to merge when both were under pressure, Farmlands and CRT were both in good shape at the time.

“We were two like-minded organisations both in good health and basically forward thinking enough to get on with it.”

However, he concedes that the nuts and bolts of seeing the merger through was also the negative of his time at the helm.

Despite there being no geographical duplication and no need to sell down doubled-up locations or rationalise staff, it was still a tough process.

“It’s been harder and slower than we anticipated but still definitely worthwhile.”

Johnstone, who says he is still passionate about governance, remains as chairman of the Wellington port operator Centreport, recently steering that to a $650 million settlement with its insurers following the 2016 earthquake. He will also continue his interests in a variety of educational and agricultural concerns.

Johnstone’s Waikato farm is in the hands of a manager, but he says he’s excited about the future of the sector and has just purchased more land in the last three months.

$1b revenue, but no bonus

In its annual results, Farmlands has reported net profit before tax and rebates of $8.4 million, on revenue of $1.1 billion for the year ended June 30. Total revenue has increased by 3.2% percent on the previous year.

Johnstone called it another positive result, against the backdrop of a subdued marketplace and challenging on-farm conditions, particularly in spring 2018.

“Farming uncertainty has dominated short-term decision-making on farms across the country.

“This has inevitably had an influence on our performance. However, our 2019 result represents a further step along the path of building resilience in our business.”

However, the board decided not to distribute an additional bonus rebate to shareholders.

“We came to this decision extremely reluctantly. However, Farmlands is navigating its way through a big and very demanding change programme, Braveheart.

“The board believes the decision not to pay a bonus rebate this year is prudent in light of the significant cash commitment to the Braveheart project and its ongoing impact on the business’ balance sheet and cash flow, compounded by sector uncertainty.”

Rob Hewett will be replacing Johnstone as the new chair.

“I’m handing over to Rob Hewett confident that Farmlands is in good heart,” said Johnstone.