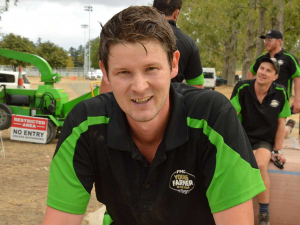 29-year-old PGG Wrightson Technical Field Representative, Joseph Watts has taken out the title for the second year in a row.

Watts has taken home $12,000 in prizes and says he is excited to get another shot at the grand final.

Watts came runner up to James Robertson in 2019 by just half a point.

The competition on Saturday saw eight regional finalists compete in eight modules and battle it out in two time and points races head-to-heads at The Central Hawke’s Bay A&P Show Grounds, Waipukurau.

Being a 2019 grand finalist, Watts’ said was a strength, knowing where to pick up points.

“Although it’s a farming competition, I’m able to feedback on some of my sporting career as well and work out how to actually win. It might not be in the prettiest way or the best way but it comes down to amounting as many points at the end of the day.”

The former professional squash player was ranked 169th on the World Circuit in his prime.

For Watts, the road to Grand Final starts now.

He grew up as a city boy in Palmerston North and studied a Bachelor of Sport and Exercise Science at Massey University.

He met his wife Lucy at University, who introduced him to the rural lifestyle.

They moved to Raetihi after graduating where he learnt to shear and spent two years in the sheds.

Discovering a passion for agronomy, he studied a post graduate diploma in Agricultural Science and Rural Studies.

He’s now been with PGG Wrightson for close to four years and is committed to winning FMG Young Farmer of the Year for 2020.

“You can do all the preparation in the world but it depends what they throw at you on the day, how it falls. Generally the cream rises to the top but there’s certainly some luck to play with there,” says Watts.

He also wants to use the pedestal as grand finalist to put a spotlight on the agrifood sector.

“That’s definitely something I want to improve on from last year, along with half a point,” he says.

Three more regional finals will be held in the South Island over the next five weeks.