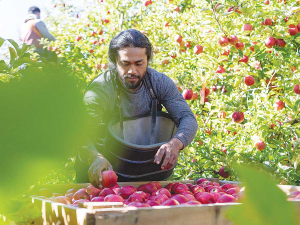 Fruit pickers and machinery operators could be among those affected by the pause on the release of MIQ rooms announced last week.

The Ministry of Business, Innovation and Employment (MBIE) announced last week that MIQ facilities which were used to accommodate returnees from overseas are now being used for community cases.

More facilities and more rooms will be needed as the outbreak unfolds.

"The Government has decided to extend the pause on the release and re-release of rooms for a short period until the situation becomes clearer," it says.

About 150 fruit pickers from selected Pacific countries are expected to start arriving every 16 fays from the end of this month.

MIQ rooms for these arrivals are booked under 'time sensitive travel allocation' approved by the Ministry for Primary Industries (MPI).

RCNZ chief executive Andrew Olsen told Rural News that the first cohort of arrivals, making up 65% of the total contingent, is expected within the next two months. The rest will arrive between November and December.

"I have spoken to MPI and they tell me there's no change to our arrangement."

He says while some arrivals were deferred in recent weeks, planning for these flights and spaces continues.

In addition, the Government recently announced one way quarantine-free travel from Vanuatu, Samoa and Tonga.

Pollard says planning is well advanced on putting in place the steps needed to make this happen.

"We were hopeful that these flights would commence in September, but realistically it is more likely to be in October," he adds.