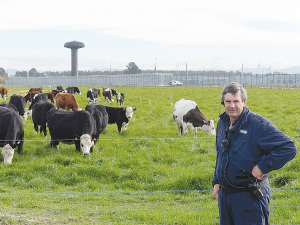 Christchurch Men’s Prison farm chief instructor Warren Chilton on the mixed-breed beef herd now being established after the dairy operation was shut down over the threat of Mycoplasma bovis. Photo: Rural News Group.

From a sheep and beef farming background, Chilton has been an instructor on the Christchurch Men’s Prison farm for about 20 years.

Read: Pigs thrive behind the wire.

He took on overall management about seven years ago, at a time when he says it was very run down.

It was a challenge, but Chilton has since doubled stock units. And he set up a small dairy herd “because that’s where the jobs were”, with a small model dairy farm and a modern eight-bail half-herringbone shed put in only two years ago.

But that is now mothballed after a brush with Mycoplasma bovis. The farm was put under an MPI notice of direction because of some trace animals bought in. Although they tested clear the farm closed its borders and suspended dairying at least for the duration of the M. bovis threat.

As far as possible, without bringing in new animals, Chilton is building up the beef and sheep operations to take up the slack.

Meanwhile, the farm also enjoyed a good barley harvest last season, yielding 7.5t/ha on light dryland soil that would normally yield 5.5t. There is now about 75ha in autumn barley. And on the day Rural News visited a prisoner, under no direct supervision, was tilling a large paddock for a spring barley crop.

Chilton entered the piggery operation in last year’s Ballance Farm Environment Awards and it made the final five for the Canterbury region.

He says that experience taught him that the piggery was too narrow a base to tick all the boxes the judges were looking for. But it whetted his appetite for the competition and he is now setting out to improve the whole farm so as to enter again in about five years.

That will include extensive native planting. In line with the farm’s philosophy of doing as much as possible themselves, the seedlings are already on farm and growing in pots to be planted out in a couple of years.

Preparing for the outside

Prisoners working on the farm are paid 40 or 60 cents an hour, officially termed an “incentive”.

“But you don’t have any problem getting people out here to work,” said Corrections Department communications adviser Carolyn Murgatroyd.

“They just love coming and being out here on the farm and doing things.”

She says the message to farmers who might consider employing a released prisoner is: “We’ve got skilled people who are keen to work”.

Chilton says many prisoners granted farm work may not have any prior farm experience.

“For the first few days they’re not really sure, but a very short time after that they actually just love it,” he told Rural News. “And that’s why they go on in the industry, because they realise this is a great industry to work in.”

He says this means his farm is regularly re-staffed with men unsure of what they are doing.

“That can be the frustrating part of it,” Chilton said. “The rewarding part is the end of that process.”