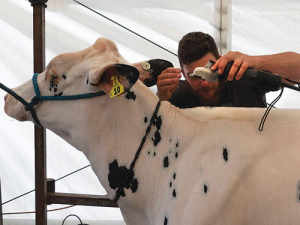 Cattle fitter Brett Barclay is all concentration as he prepares an animal for the dairy ring on the first day of the 2018 New Zealand Agricultural Show in Christchurch. Barclay, his partner Paige McLaggan and his father Tim Barclay were at the show to assist Tim’s cousin Dean Geddes -- one of just three dairy exhibitors at this year’s show.

Orginally named the Canterbury A&P Show, cattle numbers were conspicuously down at the annual show despite hopes that strict biosecurity protocols would give farmers the confidence to attend.

Last year’s show president, Mid-Canterbury dairy farmer and Jersey breeder Peter Gilbert, is one who had entered animals for the show but then decided not to show.

Gilbert says he’d been through M. bovis testing with his herd because of a positive neighbour. He didn’t want to take the risk, however small.

“Our cows were first tested April and it was September before we got the all-clear so we didn’t want to go through all that again. But the risk here is extremely small,” he told Rural News.

Gilbert says it is disappointing to see so few cattle at the show.

“I’m glad I was president last year, not this year,” he quipped.

“Last year we had really good entries -- best we’ve had in a long time -- and this year we’re way down,” Gilbert says.

“I can see why people aren’t exhibiting. If you get one cow with Mycoplasma they cull your whole herd. You’re putting your whole herd on the line really. But I think the risk here is extremely small. At least we have some cattle here. There’s a lot of shows that have none. Hopefully these ones will show that it’s alright and next year we’ll be going good again.”

Just three breeders brought dairy cows to the show: Dean Geddes of Tai Tapu’s Tahora Stud, Peter Sherriff of Sherraine Holsteins, Ohoka and Peter Hansen of the Lilac Grove Jersey Stud, Rangiora. These were so few that officials were able to section off the Canterbury Agricultural Park’s eight-bail milking shed with two bails dedicated to each herd and separated by unused bails, all in the name of herd separation.

However, the regular cattle pens were unusually empty.

The Canterbury show ran for three days and is regarded as the largest in the country. While some shows have dropped cattle altogether over M. bovis, Canterbury decided to impose strict new biosecurity protocols to allow them to attend.

Speaking on the first day, show director Geoff Bone emphasised the “positive story” of cattle farmers -- even those who did not attend -- who had worked hard to make the show a success and would come back.

He said entries overall were “great”.

“Our equestrian section’s extremely strong, our sheep section’s up on previous years and we’re growing as an organisation. We’ve got our new science and innovation pavilion (the Blinc Innovation Hub) which is really really good.”

The show was evolving and modernising, said Bone. The Blinc partnership with the show would develop over time and help bridge the urban rural gap.

“Farmers care more about the land than anyone. They’re investing money, they’re looking at technologies, and they’re evolving what they do to make it a more sustainable and ecologically friendly way of farming.”