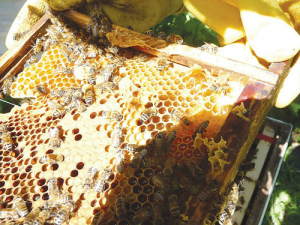 Up to 80% death rates in some hives have been reported throughout much of the North Island.

A mystery disease is reportedly currently ravaging parts of the North Island bee population with reports of up to 80% death rates in some hives.

It is understood the problem is widespread throughout much of the North Island, with beekeepers as far south as Wellington reporting issues - although most appear to be in Waikato, Bay of Plenty and central North Island regions.

Apiarists are unsure of the exact cause or extent of the problem, but possible scenarios being discussed include resistant varroa mites, increased wasp predation or a disease that started in the kiwifruit pollination industry.

She told Rural News that the full impact of the problem would not be known until spring.

"If we have a mild winter and a good spring, then hopefully beekeepers will be able to repopulate their hives and things can get back to normal," she explained. "However, if numbers don't recover, then both honey producers and the wider agricultural sector could have a serious problem."

The problem has potentially massive implications for both the bee industry and NZ's wider agri-sector. The UN's agricultural advisory arm, the FAO, recently estimated the value of pollination services to global food production is worth up to US$600 billion annually.

NZ's honey exports were valued at $505.5 million in 2020, up 46% on 2019. This means such a hit to the country's bee population would cause large-scale financial losses to the nation's beekeepers.

Meanwhile, the impact on pollination services on the country's horticulture and pasture sectors is enormous - estimated to be worth around $5 billion a year.

Lorimer says low honey prices (with only the manuka varieties fetching good returns) may have led some beekeepers to cut back on varoa mite treatment or use less effective, cheaper products and this could be the cause of any reinvasion of hives.

She says Apiculture NZ is aware of the issue, but did not know if it had advised MPI and other sector bodies of the potential looming problem.

Meanwhile, Lorimer is hoping that a mild winter and spring will see an end to the issue and the repopulation of North Island beehives.

"It's not dire straits yet; time will tell," she warns.

A Bay of Plenty teen has been given a boost into his dream career in beekeeping after receiving the 2020 Apiculture New Zealand Ron Mossup Youth Scholarship.

Jane Lorimer, president of NZ Beekeeping explains why she opposes the proposed commodity levy on honey.