Meat given a bum steer 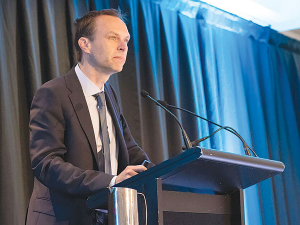 Red meat is unfairly a scapegoat in the fight against climate change, says a European academic.

Frédéric Leroy, a professor of food science and biotechnology at Vrije Universiteit, Brussels, told the recent red meat sector conference in Christchurch that people are viewing food in a surreal way in this “post-truth” era.

For example, he said, “egg-free” egg and artificial burger meat both have a similar list of ingredients of mostly water, protein, oils and “a very long list of additives to texture and structure it”.

“This is the future of food according to a minority – a loud minority, but a minority nevertheless. I worry because this narrative now is being endorsed by high level policy makers.”

He says various agencies are producing reports calling for meat eating to be discouraged or banned.

“These are, in actual fact, reports designed by policy people. So don’t underestimate the potential impact,” Leroy warned.

He pointed out that Christiana Fagueres, the architect of the Paris Climate Agreement, had called for meat eaters to be banished from restaurants to have their steaks outside with the smokers. And New York City mayor Bill de Blasio had introduced measures to reduce beef buying in the city by 50%, phase out all processed meat and introduce meatless Mondays in public schools.

In 2018, the UN environment agency proclaimed Beyond Meat and Impossible Foods – whose stated mission is to eliminate meat from animals from the food chain by 2035 – as ‘Champions of the Earth’.

However, Leroy claims these were all endorsing an “extremist agenda”, unjustified on either environmental or health grounds.

He pointed out how livestock account for only about 4% of the total greenhouse gas emissions, dwarfed by transportation, energy and industry.

“Basically the elephant in the room here is fossil fuels. No doubt about it.”

He says meat eating is a “quite modest” contributor to an individual’s carbon footprint.

“Going to a plant based diet will reduce a person’s footprint, but it is not the numbers you often see. It is something in the range of 1-6%.”

Leroy says one study modelling the switch from an omnivore diet to a vegetarian, vegan or flexitarian diet also found it resulted in deficiencies in essential nutrients.

Claims that plants are good protein sources often vanish if you take digestibility into account, he said. “Animal source foods are far superior in the way they deliver protein.”

Leroy says the claimed health risks must also be put into context. Doubling a tiny risk is still a very small risk.

He believes there is a place for animal products in quality diets.