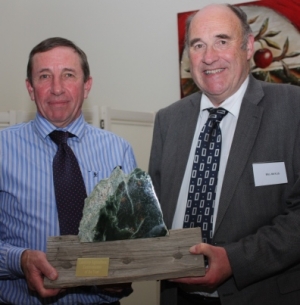 The Ministry for Primary Industries congratulates Marlborough dryland farmer Doug Avery, who has been named the 2013 Landcorp Agricultural Communicator of the Year.

Doug's Grassmere property Bonaveree was the focus of a project co-funded by MPI's Sustainable Farming Fund (SFF) from 2005 to 2008.
The project's aim was to develop land management practices for farming dryland in Southern Marlborough. It was run by the Starborough Flaxbourne Soil Conservation Group.

"Since the success of the SFF project Doug has been a skilful, passionate and generous advocate for dryland farming techniques, which include a lucerne-based grazing system," says MPI's deputy director general Scott Gallacher.

The focus of the work was Marlborough, but Doug has taken the learning's well beyond that. "This kind of expertise is important for New Zealand farming to ensure it is resilient in the face of climatic extremes," Gallacher says.

What Gallacher has achieved helping other farmers across New Zealand and Australia become more resilient and productive, shows how the SFF can be a catalyst for improving sustainable practice within the primary industries.

Gallacher was presented with the trophy at an event in Hamilton on Thursday (June 12), organised by the Guild of Agricultural Journalists and Communicators.

The SFF project Gallacher was involved with was, "Changing attitudes and practice for farming dry land in Marlborough", 05/132, run by the Starborough and Flaxbourne Soil Conservation Group from 2005 to 2008, with $197,000 of SFF funding for a project worth $401,500 in total.