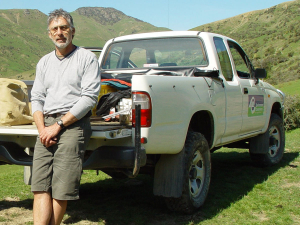 Nassella tussock (Nassella trichotoma) occurs in drought-prone grasslands, mainly in the Canterbury and Marlborough regions. It is unique in that it is the only weed in New Zealand to have had its own Act of Parliament, the Nassella Tussock Act 1946. The Act legislated for the establishment of the Marlborough and North Canterbury Nassella Tussock Boards to coordinate central government-funded control programmes, a responsibility now resting with the regional councils through Regional Pest Management programmes under the Biosecurity Act 1993.

The historical control programmes have substantially reduced the weed’s population from what were, in some cases, virtual monocultures of up to 35,000 plants per hectare of the tussock, which is unpalatable for livestock.

Although eradication has proven elusive, a 17-year study in Canterbury, published in 2016, showed that the population density of the weed across 878 invaded farms in the Hurunui district of North Canterbury is stable at about 15 plants per hectare.

Grubbing of the plants (digging out) before seeding each year – the management tactic practiced on these farms – has been responsible for maintaining this ‘equilibrium’ according to on-farm experiments and modelling.

Left uncontrolled, the modelling indicates that the weed’s populations will increase, potentially reaching the economically damaging monocultures of the past which in some cases forced farmers to abandon their properties.

The new app, developed by AgResearch with funding from the Ministry of Business, Innovation and Employment in collaboration with Environment Canterbury, provides a tool to visualise a range of grubbing strategies. The app deploys a population model that counts the number of nassella tussock plants in summer and winter in each of seven different life stages of the tussock and keeps track of their contribution to the total tussock population over successive years.

AgResearch Principal Scientist, Graeme Bourdôt, who with colleagues has spent decades researching nassella tussock, says this app follows in the path of another similar tool for giant buttercup which AgResearch developed to support dairy farmers in weed management decision-making.

“Efforts to eradicate nassella have proven unsuccessful, so now it is a case of living with it and managing it. This is where the app can give the best information to people on how to manage the weed using grubbing to avoid uncontrolled population growth that can lead to increased future grubbing costs, losses in farm productivity and unacceptable impacts on a neighbour.”

Environment Canterbury Biosecurity Officer Matt Smith says nassella tussock was such an issue in the mid-20th Century that some North Canterbury farmers abandoned their properties because they were no longer profitable. Many decades of hard work since then have returned plant numbers to a manageable level.

“The app developed by AgResearch is a great way for land occupiers to model different control scenarios on their properties. It clearly demonstrates that annual control is the best method to decrease or maintain plant numbers. Applying different scenarios may also help convince some properties to move towards different control regimes. For instance, the modelling shows that for some properties controlling nassella tussock twice a year may lead to a drastic decrease in plant numbers. At Environment Canterbury, we have used the app to measure how long it might take an unknown infestation to turn from a few plants into a major issue.”