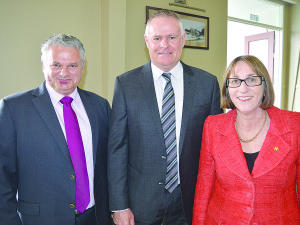 Speaking at the Fonterra Shareholders Fund annual meeting in Auckland last week, McBride says part of the co-op’s planned governance succession happened in June when he was announced as chairman-elect.

“We made the announcement early to provide the co-op and the management team with the stability to push on with embedding our strategy and cultural change,” he says.

McBride took over from John Monaghan at Fonterra’s annual general in Masterton on November 5.

McBride was elected to Fonterra’s board in 2018. A former Zespri chairman, he remains a member of the Zespri China Advisory Board. He is also the chief executive officer of Trinity Lands Limited.

The new chairman says Fonterra must keep up with the rapid rate of changing customer and community expectations.

“We are confident this can be achieved through further investment in science and by using advances in technology and innovations to help protect or enhance the premium reputation of our milk.”

He says the dairy co-op was privileged to be recognised by the Government as an essential business, which allowed it to continue operating through the various Covid-19 lockdowns.

“The co-op is not immune to Covid-19, but this year’s performance shows the diversity of our earnings, which is helping us to manage the impact of the global pandemic.

“International scale is one of the reasons our co-op was established, and it remains a key strength.

“Our people have worked hard to leverage that scale, shifting our New Zealand milk into the products and places where we can earn the highest possible value under the circumstances.

“Importantly, this year has demonstrated that, even in the middle of a global pandemic, our strategy will deliver.”

McBride says there is still a high level of uncertainty as to how the global recession and new waves of Covid-19 will impact demand globally. The co-op must stick with its strategy and focus on what is within its control.

Fonterra shareholders voted to ratify the appointment of Holly Kramer, who joined the board in April, as an independent director.

The reappointment of another independent director, Bruce Hassall, was also ratified.