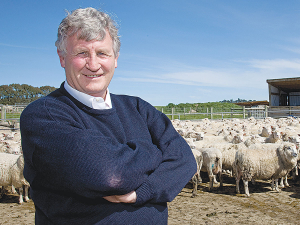 Neylon has carved out an impressive track record in the primary export sector.

A Touch of Madness details Neylon’s experiences in the heady days of deer recovery, stints in shellfish and salmon industries, shearing, large scale farming and more recently the sheep milk industry through Blue River Dairy – to name a few.

Neylon accuses Fonterra of being “so arrogant to the point that Government Ministers had to make an appointment to see their top executive”. He adds: “Backed by legislation, the dairy co-op took off around the world investing in China, South America and Australia determined to show leadership and ‘punch above its weight’ only to be stiff-armed, NRL-style, in Aussie, China and South America”.

Neylon claims the net effect has seen Fonterra’s farm assets adjusted down in value as the capital gain game took a hit.

“Well done all those top-class directors and executives put in place who seem to believe in their own bullshit”.

However, Fonterra is not the only target for criticism from the straight-talking Southlander – with the Government, bureaucrats and Landcorp all coming in for a bollocking.

“I struggle to come to grips with some of the decisions that come out of Wellington’s bureaucratic ivory towers,” Neylon says.

“One case in point is the Government-sponsored Primary Growth Fund. After being encouraged to apply and going through all the required hoops, and seeing large amounts of capital being handed out to consortiums such as Silver Fern Farms, Wrightson’s and Landcorp to help develop a questionable strategy for the meat industry, that did not include the other players, we made an application.”

Neylon claims his PGF application was supported by the Southland region and the Alliance Group.

“They could see what we were proposing, an overall benefit to the sheep and meat industry of New Zealand and sheep farmers in general, they wanted to be part of the proposal,” he explains.

“Having met with those charged with vetting the application and various government advisors and politicians, we were advised that our application had every chance of success and a person from the Ministry of Primary Industries would visit and critique the opportunity. With that completed, we could expect a capital allocation in the May round.”

Neylon then details how the MPI person never turned up on the due date.

“Nothing seemed to come out of the Primary Growth Fund investment. When we enquired into it, it appeared that the strategy had changed. The original proposal appeared to have morphed into something called ‘Farm IQ’, that had set itself up in a suite of offices below the Landcorp head office in Wellington. Apparently, they were to develop a software package that would assist all farmers throughout New Zealand.”

In the book, Neylon also blasts Landcorp after the state farmer pulled out of the Blue River Dairy and decided to establish its own sheep milking operation “with all the information we had supplied”.

“The Primary Growth Fund had seen fit to support their $34 million application to duplicate what we had already achieved,” Neylon adds. “I have never quite come to terms with their need to set up in competition with Blue River Dairy instead of helping to grow the total industry from the base we had already setup.”

A Touch of Madness was launched earlier this month and is now available via: