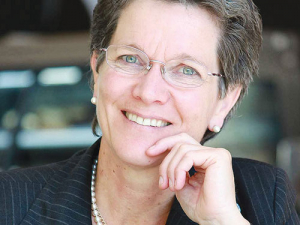 Retiring Fonterra director Nicola Shadbolt is happy with the calibre of director candidates endorsed by the co-op board.

Shadbolt, who leaves the board in November after nine years, says she’s confident “our cooperative will be in good hands during the up to nine years they will serve”.

Fonterra’s board is backing Zespri chairman Peter McBride and Maori agribusiness leader Jamie Tuuta in the 2018 board elections.

Sitting director Ashley Waugh has also won nomination from the board after being recommended by the independent selection panel.

Shadbolt and former chairman John Wilson will step down at the annual meeting at the Lichfield site on November 8.

The self-nomination process that allows a farmer to stand with the support of 35 shareholders is now open. Nominations close on September 20.

The full list of candidates will be announced on September 24.

Shadbolt says a recent governance and representation review resulted in nine-year directorships being chosen as optimum and 12 years as maximum.

“I have done my nine years, no mean feat; it sets a good precedent,” she told Rural News.

“The governance and representation review also changed the process of director elections to encourage very able and experienced governors, who we know are in our shareholder base, to step up.

“Experienced governors know what good board culture and leadership is, so can expect and command it from day one.

“A recent board member, Andy Macfarlane, is a good example. He came to the board with a breadth of governance roles and chairmanship experience.

“The two new nominees, Peter and Jamie, have similar, strong backgrounds and I am confident they will also bring high expectations to the board.”

Voting packs containing candidate profiles will be mailed to eligible shareholders on October 15.  Shareholders can vote by internet or post using the first-past-the-post majority system.  Voting closes at 10.30am on November 6, and results will be announced later that day.

McBride, Zespri chairman since 2013, has investments in the kiwifruit and dairy industries.

Tuuta was appointed chair of Maori Television in May this year. He was previously chair of the Parininihi ki Waitōtara Incorporation, the largest farmer in Taranaki and a large supplier to Fonterra.

Nicola Shadbolt was elected to the Fonterra board in 2009.

She is a professor of farm and agribusiness management at Massey University, serves on the board of the manager of the Fonterra shareholders’ fund and represents New Zealand in the International Farm Comparison Network in Dairying.

Shadbolt was made an officer of the NZ Order of Merit for service to agribusiness in 2018.

She lives in the Pohangina Valley, Manawatu, the base for five farming and forestry equity partnerships she runs, including two dairy farms.