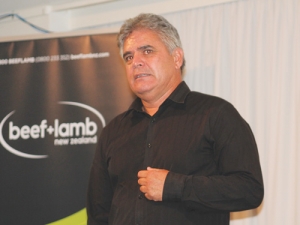 A group of 11 farms owned by various iwi in Northland have formed a collective under the Te Hiku banner to gain greater influence through scale.

The group want scale for marketing and branding, creating local employment and career development and to gain bargaining power in strategic partnerships with processors.

More farms are likely to join the Te Hiku, Northland, collective, in which current properties include Landcorp farms which have come under Treaty of Waitangi settlements.

It also may be the forerunner to a national initiative, with discussions underway between Te Hiku, Tainui, and Ngai Tahu.

The collective has 11 farms from Mangamuka to Cape Reinga, and it is growing, having added two farms in the previous week, Marsden said.

About 16,000ha of farmland comes under the collective – there are eight ownership groups that combine local trusts, whanau and iwi trusts. They have at least 85,000 stock units.

One goal is to intensify meat production to create jobs in the processing sector.

Marsden says there's potential for 18 more farms which would add another 15,000ha. They also hope to expand into Kaipara where they know some iwi farms are languishing because of isolation.

And Marsden says they have just sat down with Tainui and Ngai Tahu to look at an iwi collective across the country.

"There's an appetite to develop a national strategy within the key primary industries. The farming sectors, the forestry sector – all over the country a joined up way would give us a whole national strategy rather than just a Northland strategy.

"That workshop starts in May to build a relationship between the Tainui and the Ngai Tahu who are investing heavily in all those key primary industries."

Marsden said with the Te Hiku sheep and beef collective they intend to farm with the long term goals of sustainability, efficiency and the need to care for local economies before anyone else's economy.

He said they were hearing about Chinese conglomerates in the area and what they are doing to take control.

"We are not worried about that sort of thing. Our view is let's take care of ourselves first, before we worry about anybody else outside the shores of New Zealand," he told Rural News.

"Our aspirations are better utilisation of our land to benefit our people. When we talk about our people we talk about not just Maori, we talk about the Northland economy. People need to understand that so there is no fear of a 'them and us' approach through this strategy.

"Our view is that if we don't make Northland a funky place to live that raises the educational aspirations of children and provides employment opportunities, then we are not achieving anything at all.

"Anyone can make money, but the need to maintain a balanced social conscience as to how you make money is our goal. Our goal is to get our people – or any person interested in the farming sector – skilled then employed. In terms of being Maori owned we like to brand ourselves and say we like to contribute to the future of the Northland economy."

To do that they need to partner with people of capability and strategy, which likely will include BLNZ. They want to look outside the farmgate for added value and diversification opportunities.

The collective profile is pretty new. Through the Treaty settlement process they have inherited a number of farms from Landcorp, which is focused on dairy with beef as a sideline.

"We believe beef is a vital diversification opportunity for the iwi vision and we want to go there because the potential to build a relationship with processors gives us more employment opportunities in the Moerewa-Dargaville area."

Milk production may add a couple of jobs with each dairy platform. "But beef could bring 200-300 jobs in the processing sector."

Marsden said they are deliberately slowing things down to get the formula right, building the strategy right from the beginning.

"Scale brings influence in terms of opportunities for processing, marketing and branding," he said.

They have already been approached by processors who say they can brand and market for them.

But the Te Hiku collective will also look at their values and whether the relationship brings value, or they will go elsewhere.

"The 'elsewhere' could be to other processors to negotiate better deals or, simply, if we've got enough scale, build our own."

Some discussions had been held with Silver Fern Farms on processing opportunities. They have also talked with Affco at Wairoa where they are hoping issues for workers can be settled "without us flexing too much muscle".

Scale brings bargaining, selling and buying power. "So we can now have some influence over what happens to us."

Skills and careers are a new path for Maori who previously often had left school to get a job and held onto it as long as they could, Marsden said.

"The goal is to create a primary sector centre of excellence around Northland and the Northland College area."

The Te Hiku collective wants to capture the value chain.

"Our goal is also to get branded overseas at some point – but where we own ourselves in that space."

He said they are "fixated" on sustainability. "We know there will be major changes in the farming sector in the near future: we will have to get the cattle out of the water for a start."

They will be proactive about initiatives driven by the Government. There also may be employment opportunities in environmental work.

They have been told it is all doable. They are working with MPI, AgFirst, KPMG, BLNZ, Te Puna Kokiri, the Ministry for Business, Innovation and Employment and government.

Creativity in dealing with drought

Beef + Lamb New Zealand is taking some creative initiatives to help farmers deal with the drought gripping large parts of the country.