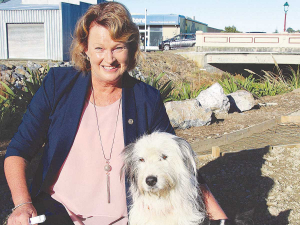 Manawatu District Mayor Helen Worboys says the CD field days is designed to showcase the backbone of the NZ economy.

The Central Districts field days is designed to showcase what the Manawatu region is all about – the backbone of the NZ economy.

That’s the view of the Manawatu District Mayor Helen Warboys who says the event is logically based in the town of Feilding because this has become a significant agricultural hub.

“Something I’ve been working on creating for many years,” she told Rural News.

Warboys says the region is all about food production and is also supported by having significant military bases in the region as well.

“In my previous role as the manager of Feilding Promotions, the goal was for the town to become the agribusiness centre for NZ,” she explains. “We did a lot of work in previous years to attract agribusinesses to the town, which in the 1990s was well known as rural servicing town where mums and dads came on Friday for the sheep and cattle sale and did the shopping.”

But Mayor Warboys says, over time, they started to attract companies like Rabobank and FMG and other businesses that support agriculture.  She says they have been very successful at that over the past 25 years and have achieved their goal of being a very significant rural hub.

She adds that a number of agri science and food science organisations are also in the region – including Food HQ at Massey University.

“There are a number of initiatives that we are involved in regionally that are all about food production and how we add value to it,” Warboys explains. “As well the hub, the Manawatu district is a highly productive grass roots farming region, which we are very proud of.”

She says they are still working on growing the hub and she sees the new Manawatu/Taraua highway, that will replace the now abandoned Manawatu Gorge Road, as ensuring that district is well connect from all points of the compass.

However, it’s the Central Districts field days that help showcase the growth and importance of the Manawatu District.

“Farmers come from all over NZ for the CD field days and some who say they prefer it because they are not as big as the national event in Hamilton,” Warboys says. “They say it has got too big and it’s hard to find your way around the Mystery Creek site and that sort of stuff.”

Warboys says exhibitors for the field days come from all around NZ and before the days of Covid, some came from overseas.

She believes the CD field days does a lot to build relationships between the urban and rural communities and many of those who go to the event are from towns but are keen to see and admire the innovation that is driving efficiency in the rural sector.

Although the national economy is still functioning below pre-pandemic levels and the road ahead remains uncertain, the Manawatu region appears to be bearing up well.

Minister of Agriculture and Rural Communities, Damien O’Connor on the importance of field days.