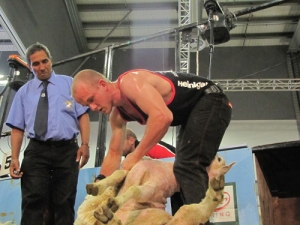 Taranaki shearer Darren Alexander at week's Royal Bath and West Show at Shepton Mallet in the southwest of England.

Alexander has celebrated his first trip to England by winning a title at one of England's major shows.

The 22-year-old shearer, who graduated from Lincoln College in Canterbury with a B.Sc last year, won the senior final at the British Golden Shears, during last week's Royal Bath and West Show at Shepton Mallet in the southwest of England.

It was the 9th senior win for the 2014 New Zealand intermediate champion, taking him to just one win from being automatically graded-up to the Open class, with the target of one-day emulating the feat of father Lloyd Alexander, a Golden Shears Open finalist in 1992.

The new hope in the family, pictured when fourth in the Northern Shears senior final at Auckland's Royal Easter Show in March, isn't hanging around, and says he may start mixing senior and open class competition in the UK in preparation for the big step up after the 2016-2017 New Zealand season starts in October.

He was runner-up in Shearing Sports New Zealand's latest-season senior rankings, with five wins in 17 finals, which included placings at the Golden Shears in Masterton and New Zealand championships in Te Kuiti, after similar results in major South Island events the Otago championships in Balclutha and the Southern Shears in Gore.

His wins came at Tauranga, Levin, Dannevirke, Apiti and Waitomo, following victories the previous season at Ashburton, and Stratford and Ohura, two of the closest shows to his remote home territory on the Forgotten World Highway, the 150km of State Highway 43 between Stratford and Taumarunui.

His New Zealand Championships win was one of seven intermediate victories in 2012-2014.

He had to work hard for his win in England, being second to finish, four seconds behind first-man-off Stuart Davidson, from Scotland, and scoring just third-best board points, and second-best in pen judging.

But overall he was stable to take victory by just over 1pt from runner-up and former British Isles intermediate champion Harry Gilbert, of England.

The Open final at Royal Bath and West was won by Adam Berry. He automatically retained his England World Championships team place and now headed for the big event in Invercargill, NZ, on February 9-11, when he hopes to improve on his 6th placing in the 2012 final at the home of the Golden Shears in Masterton, and a 2014 semi-final placing in Gorey, Ireland.

Safety should be a key consideration for all on-farm activities, while not forgetting less commonly used areas like woolsheds.