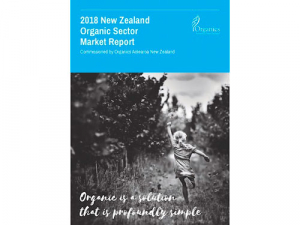 New Zealand's organic exports are now worth $335 million – up 42% on three years ago.

Meanwhile, sales of organic products on the domestic market have also increased, to $254m, bringing the total value of organics to just on $600m.

Organics Aotearoa NZ (OANZ) announced the result of its three-yearly survey at a function at Parliament last week, attended by growers, processors and supermarkets.

Fresh fruit and vegetables remain the largest earner of export dollars for the sector, bringing in nearly $136m. Dairy, meat and wool is next, earning $99.5m, and wine and beer accounted for $46.5m.

In the last three years the biggest growth has been in wine exports – up 87%, followed by meat, wool and dairy exports up 45% and fruit and vegetables up 26%.

By far the biggest export earners in horticulture are kiwifruit and pipfruit. And notable growth is seen in a new category -- cosmetic and beauty products, now earning $28m.

OANZ chief executive Brendan Hoare says great opportunities exist for NZ organic producers. The world wants what NZ has to offer, he says, and we have the capability to grow our share of the global market.

“The report articulates a national and global mood for change to natural, ethical, sustainable food and other daily used products. Consumers want change so they can live their values; producers and farmers are seeking change to do what is good for the land they love; and global markets are demanding greater and greater choice as organic goes mainstream.”

Hoare believes producers and manufacturers are listening to the market signals, and he says 50% of the organics producers surveyed for the report showed interest in getting full organic certification or transitioning towards organic.

Hoare says the report also shows that certified organic operations were up 12% to 1118 licensees and 1672 certified enterprises. It shows a 17% increase in land under organic production -- to almost 89,000ha, due to 50% growth in organic livestock area.

On the domestic front, the report shows that 8/10 NZ shoppers buy organic food and groceries at least fortnightly. But most shoppers do not fully understand what ‘organic’ means, the report shows. People say ‘health’ is their main reason for buying organics, but only 2.2% of all NZ’s grocery sales are organic.

Agriculture Minister Damien O’Connor, who officially unveiled the report, says it’s taken time for the organic sector to grow and be taken seriously. It has pushed against the tide because for many years it wasn’t seen as economic, but this has now changed, he says.

“Worldwide people are seeking food with value attached to it -- food with sustainable, ethical, authentic values and caring. These are values we can be proud of in NZ. We produce food for people who care by people who care, and that should be the motto.”

O’Connor believes NZ must produce the world’s finest food for the world’s most discerning customers because they will pay more.