Outstanding in her field 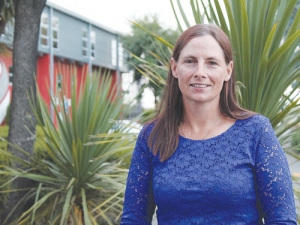 Dairy Woman of the Year 2015 Katie Milne hopes to use her new profile for the wider good of New Zealand farming.

Katie Milne hopes winning the Dairy Woman of the Year title will be a good platform to push messages about farming as “the rest of New Zealand do not understand us well”.

“They need to understand us better so we can be allowed to grow our industry, and to do that New Zealand has got to back us,” Milne told Rural News.

“Telling our stories and using opportunities to speak to wider New Zealand will help,” says Milne, who is already carrying the flag as a Federated Farmers board member and West Coast provincial president.

“It is critical; we’ve got to take dairying forward.” Winning the title is a chance to tell New Zealand that farmers are already sustainable, mindful of the environment and good employers, and a lot more work is being done in those areas.

“It is another platform hopefully to show that investing in the dairy industry, through actual money or licence to farm, is a good investment for New Zealand.”

Milne has enjoyed her two years on the Federated Farmers national board. “I am trying to put my best foot forward for all farming families in this case, not just dairy women.

“Especially in the area of regulation and legislation we’ve got a magnificent team that helps with that. But being able to be a farmer who gets in front of a minister and puts the case as to why a piece of legislation won’t work is absolutely powerful. They really listen and we’ve had some good results.

“We can put things in a way that is not bureaucratic – it’s just the cold, hard facts that will apply. They all genuinely listen. You can’t necessarily get them to change every time but we get good results that don’t get out to the wider public and our farming public as they should.”

Milne says she has been “blown away” by some of the progress. One example was convincing the Government to continue to allow fortnightly rostering, and allowing accommodation rental to continue to be deducted from wages.

Another of Milne’s Federated Farmers portfolios has been adverse events and in her time on the board there have been earthquakes (Seddon); volcanoes with minor eruptions from Ruapehu which involved advisories on dealing with stock and ash; flooding, snowstorms and drought, including the West Coast’s first official drought.

“It teaches you a lot, going through a drought. We have learnt those lessons loud and clear and everyone is much more prepared.”

There has also been fruit fly and Psa incusions which come within her biosecurity portfolio. “I am not wanting pestilence and plague, but that’s about all we haven’t had since I have been adverse events spokesperson.”

Just go and do it!

"There don't seem to be any barriers stopping anyone going forward,” Katie Milne says.

“If you’ve got a passion, or you think something is not quite right or there is something you want to say, just do it either through Dairy Women’s Network or discussions groups, or by going to a Feds meeting and taking it further. Our voices need to be heard; we are 50% of the industry and we have a different way of looking at things.

“I can’t stress how important it is to have a crack. As soon as you start putting your hand up, as long as it is sensible and makes sense, it may take time but people will start to take notice. Don’t give up; tap into those networks.”

In farming if you ask someone a bit ahead of you in the chain, they will help you. Locally there are many areas to get involved from TBfree to catchment groups.

Milne’s heritage is sheep and beef in South Westland, which are still in the family. Her mother was the farmer and ran the farm; her father, a weekend farmer, was an accountant who ran the local power company.

There were no dairy cows except a couple that were hand-milked and she had to learn from scratch when she entered dairying. She now farms a small high BW Jersey herd of 200 cows with her partner at Rotomanu, Lake Brunner. They also rear replacement heifer calves and run a contracting operation.

Milne says she was always querying why things were done a certain way. But she learnt plenty in discussion groups from the consulting officers and other farmers.

“One thing great about the dairy industry is that other farmers will tell you what will make you a better farmer.  If we all do better we all win because it helps make the industry more efficient and that’s reflected in payout.”

Milne looks forward to the year-long Global Women ‘Women in Leadership’ course worth $25,000, her main prize for the Dairy Woman of the Year title. “That’s a pretty amazing package. I have an open mind as to how it will work and what it will mean because I’m ‘a possum in the headlights’ on that one.”

Although she is already involved in leadership with Federated Farmers as a national board member and West Coast President, she says some of the “awesome stuff” some of the other ladies are doing out there is groundbreaking for the industry.

The 2021 Dairy Woman of the Year says her win is "pretty amazing".

The 2021 Fonterra Dairy Woman of the Year says that her passion lies in mentoring other people within the industry.

The three finalists for 2021 Fonterra Dairy Woman of the Year award have been named.