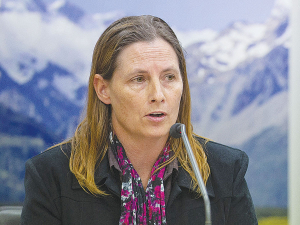 Katie Milne is aiming to be the first New Zealander elected to the top position.

Milne, the first woman to serve as Federated Farmers national president, is in a three-way battle for the job.

She has been a member of the WFO board for the past four years and serves as its treasurer.

Milne told Dairy News that, over the years, some farmers from all over the world had suggested that she should run for the presidency.

The WFO, made up over 70 national farmer organisations, will choose its new president at the general assembly in Budapest, Hungary next month.

If successful, Milne will be the first elected president from New Zealand and the second woman chosen for the role.

Milne announced her candidacy from the milking shed at Rotomanu where she milks 200 cows.

"I have decided to throw my hat in the ring for the presidency of the WFO," she says. "It's a pretty big job, pretty important job at the moment given all the pressures on farming - whether it's livestock farming, the supply chain or fertiliser prices.

"I thought, I'll put my hat in the ring and offer some more options for farmers around the world."

Since stepping down as Feds president, Milne has served on a range of farming-related boards and national and regional advisory committees.

She serves on the board of Crown entity Predator Free 2050 - which is tasked with the ambitious task of eradicating possums, stoats and rats by 2050 - and the Todd Foundation. She also chairs Predator Free South Westland.

Milne received the Dairy Woman of the Year Award in 2015.

She says the WFO's role is to be the farmers' voice and advocate on their behalf at high levels.

She hopes to bat for the livestock sector which she claims is taking a hiding from those who advocate for plant-based proteins.

"All farming types have a place in the world: working against livestock farming can endanger food security."

Milne, who will attend the general assembly next month, will be up against current vice president and French farming leader Arnold Puech D'Alissac and French Canadian farmer Marcel Groleau.