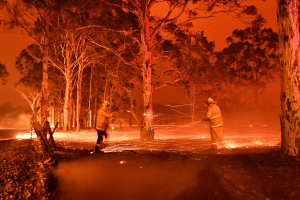 Simson says many farmers had lost homes, livestock and infrastructure.

"While we don't know exact numbers yet, there has been a significant loss of livestock in parts of the country, most recently in areas such as northern Victoria and the south coast of NSW,” she says.

"The most impacted sectors include the dairy sector where large parts of the NSW south coast, and north eastern Victoria were impacted and continue to be under threat.

"There are also reported losses in the beef and sheep sectors in upper Murray region of Victoria, lower Riverina and Snowy Mountains areas."

The NFF is paying tribute to emergency service personnel including the Rural Fire Service (RFS) brigades across the country who are helping farmers and rural communities protect homes, livestock and property.

"Many of the volunteers are of course farmers themselves and the commitment, service and courage they have demonstrated makes Australians extremely proud that we have men and women like this in our community,” she says.

"Already we have seen the devastation caused by the current severe drought and now we have catastrophic bushfires to deal with, so farmers and rural and regional communities simply must have all of the assistance they need.

"I have been liaising with federal and state parliamentarians and working closely with the NFF's impacted state members, the Victorian Farmers' Federation and NSW Farmers, to determine the most pressing needs of affected farmers and how these needs can be met.

"I'm pleased to see the Commonwealth and states working hand in hand in this crisis to deliver much needed aid and this must continue to ensure we get through this dreadful series of events.”

Oz getting hotter and drier — report

Last year was officially Australia’s hottest and driest year on record, according to the country’s Bureau of Meteorology.