Pay cut worth every cent 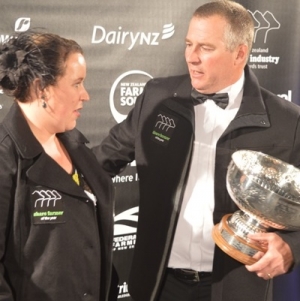 DANNEVIRKE SHAREMILKERS Mark and Jaime Arnold were named the 2016 New Zealand Share Farmers of the Year. They took home $52,000 in cash and prizes at last night's national awards in Wellington.

The Arnolds are 50% sharemilking 500 cows for Mike and Sherynn Harold and Stuart and Sandra Cordell; their fifth season on the farm and a great relationship with the farm owners led the owners to partner them as they progressed from lower order to 50% sharemilking.

The Arnolds took a huge pay cut when they launched their dairy farming career eight years ago.

The former logging crew manager and teacher went on a single herd manager's salary when they stepped onto a dairy farm for the first time.

Share Farmer head judge and DairyNZ Senior Consulting Officer Abby Scott says the economic climate had meant the finalists had changed some of their management practices to ensure they better managed available resources.

"People were really focusing on growing grass and supplement within their farm boundary and making sure they utilised it. They were also more interested in profit per hectare rather than benchmarking milk production per cow. We also saw some really innovative ways in how people have reduced costs," Scott says.

"They were all very positive about the industry, about their business and their future equity growth. Their positivity rubbed off on you and was infectious. There's no doubt they're in the industry for the long haul."

$64m gain from sale for Fonterra

Fonterra has pulled the plug on another investment overseas as the co-op continues to rebuild its balance sheet.