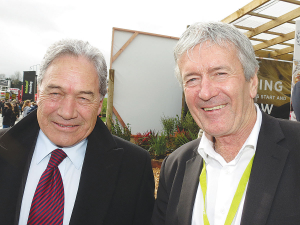 Neither Winston Peters or Damien O’Connor have replied to the letter.

Two Waimarino district sheep and beef farmers, Donna Journeaux and Cathy Rogers, are asking the question but are not getting any answers

Their letter to Deputy Prime Minister Winston Peters has been circulating on social media sites. But they’ve had the run-around getting any answers from Peters or any Government ministers.

“We are writing to you concerning your pre-election statements about putting woollen insulation and carpet in state houses and Parliament offices,” they wrote to Peters.

“We believe that if the Government is sincere in their quest to save the planet they would be supporting our sheep industry and using environmentally friendly woollen products as opposed to synthetic products.

“Not only is wool a superior, sustainable, environmentally friendly product, it also has the benefits of absorbing toxins, doesn’t give off static and is flame retardant, durable and hard wearing, unlike the commonly used synthetic carpets which are toxic and an environmental hazard to dispose of due to their chemical content.”

The letter points out that synthetic carpets are widely used because they are cheaper than woollen carpets, but that cheap plastic/synthetic products, in whatever form, are hugely damaging to the environment.

“We believe the Government should set an example to our nation and the rest of the world by supporting our sheep industry and use only woollen insulation and carpets in all future renovations and new builds, Parliament offices and commercial building.”

Journeaux and Rogers add that the Government is pressuring farmers to comply with a raft of environmental compliance issues, mostly with unrealistic deadlines.

“So we feel it is only right and consistent that you play your part by supporting the sheep industry and using our quality, home grown, environmentally, sustainable woollen products and set an example to the rest of the world [in being] genuine about your concerns for the environment.”

Journeaux and Rogers also wrote in a similar vein to other Government ministers. They have received only an automated reply from Peter’s office, an acknowledgement of receipt from Agriculture Minister Damien O’Connor’s office, and the office of Climate Change Minister James Shaw said it was passing the letter to the office of Economic Development Minister Phil Twyford.

Meanwhile, Peter’s office declined to comment to Rural News but said a reply will be sent to Journeaux and Rogers “in due course”.