Plenty of sweet ideas for beekeepers 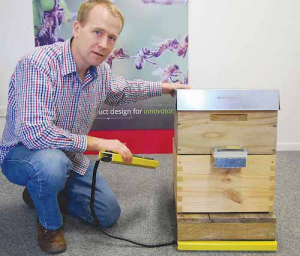 Berywn Hoyt of Brush Technology and Hivemind, with the beehive monitoring hardware at the company’s Christchurch office.

Remote beehive monitoring company Hivemind is undeterred by a shortfall in a crowdfunding effort to test demand for a hobbyist version of its product.

Hivemind, of Christchurch, produces a satellite-connected beehive monitoring system for remote hive sites, even those out of mobile coverage.

The system primarily monitors beehive weight, hive temperature, humidity and site rainfall. A wireless site hub collects the readings from individual hives and uploads the data via a satellite link to the company’s webserver, to be made available to clients online.

Earlier this year, the company started an Indiegogo campaign to crowdfund its work on a cheaper hobbyist version, which would connect via domestic wireless and smartphones rather than satellite, and be suitable for backyard beekeepers. The campaign fell short of its funding target.

“I guess we found out what we needed to from that: no, it’s not something the hobbyists are keen on at the moment,” said Hivemind director Berwyn Hoyt.

“I’m not sure of the reason for that, and it’s a pity in some ways because that would’ve been a nice way to break into the hobbyist market.”

But with about 300 commercial customers now in Australia and New Zealand, the company is looking ahead and again exhibited at the recent national Apiculture Conference in Rotorua.

Hoyt says their key products are hive scales which sit under a hive, and the hive strength monitor which clips to the side. Return customers say their products are among the most reliable available, after overcoming weatherproofing issues. Careful attention to power consumption allows them to run on simple small batteries.

Hoyt says hive weight is the primary sensor for productivity, showing how much honey is coming in. Hivemind also offers an infra-red sensor to monitor hive doorway activity, effectively counting bees going in and out. Hoyt says that’s a key indicator for the pollination market.

“Growers need to know that the hives they’re hiring are actually working well. Because they have no way to tell, they’re taking the beekeeper’s word for it that their hives are healthy.

“So this is a way that pollinators can offer a higher quality product and say, ‘we can actually measure this now and this is what you’re getting’.”

Hivemind has grown out of Brush Technology, a Christchurch hi-tech design consultancy, which Hoyt founded with his brothers Bryan and Ben, chiefly to develop other people’s product ideas.

“Brush decided at one point that we wanted a product of our own; we asked 'what’s it going to be?' It ended up being Hivemind,” he says.

The idea of hive monitoring came from a chance conversation between a beekeeper and an associate of the Hoyts – Professor Keith Alexander, the inventor of the springless trampoline.

“We were looking for a product of our own to develop, so we did our market research, asked beekeepers what they needed, and this is what came out.”

Hoyt says the “big plan” now is to develop new sensors and analytics to make Hivemind the industry standard for monitoring hive health.

“Hive health is a big one. People are concerned about bees right now and rightly so.”

“We need to get our product to the point where not only are they measuring productivity, which they’re doing right now, and how well the bees are pollinating, but early indication of disease.”

Hoyt says they would like to put sensors on every hive, rather than at present where the system provides a kind-of site average, i.e. on a site of 30 - 100 hives only four or five may have sensors.

They are also working on new low-cost satellite technology which he reckons could be a “game-changer” in hardware and data costs.