Primary industry education - not there yet 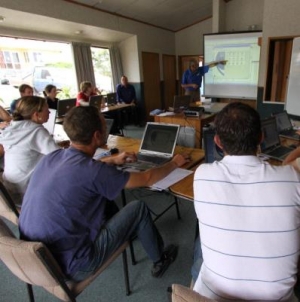 Lincoln University says that while there are some encouraging signs of changing perceptions concerning primary sector qualifications and careers, a recent Ministry of Education report suggests there is still a long way to go.

The recent release of the Ministry’s Profile and Trends: New Zealand’s Tertiary Education Sector 2013 report, shows that, for Bachelors level or higher, only 1.1% of New Zealand university students are studying an agriculture-based discipline. This, despite more than 60% of the nation’s export wealth coming from food and fibre production.

Despite some movement on the issue from government and some secondary schools around the country, the report reflects an ongoing concern regarding the lack of skilled graduates entering the land-based industries.

Minister for Primary Industries, Nathan Guy, recently announced the need for approximately 50,000 more workers in the primary industry if the country has any hope of doubling its primary exports by 2025.  Estimates suggest that approximately half of these workers will need to be tertiary educated.

Part of the issue has been blamed on New Zealand’s increasingly urbanised society, resulting in a ‘disconnect’ or unfamiliarity with agriculture or the land-based industries in general.

“It is vital if we are to achieve the kind of growth in student numbers the industry needs that we find ways to engage urban students,” says Lincoln University’s deputy vice-chancellor business development, Jeremy Baker.

“One of the key messages we need to get across is that there is much more to the primary sector than just farming.”

“We need to show that it is a vast sector, incorporating a range of science, business and IT disciplines across both rural and urban environments. It’s a multibillion dollar, multifaceted industry which is of tremendous importance to New Zealand, and comes with some amazing opportunities for students prepared to open themselves up to the possibilities,” says Baker.

“Whether one has grown up on a farm or not is irrelevant. There are many careers in the primary sector which involve working in towns and cities,”

Baker also sees a perception around primary sector training as being for the less academically gifted as being particularly unhelpful.

“The industry needs a range of people with a range of skills, but perceptions need to change about the kind of students suitable for the sector.