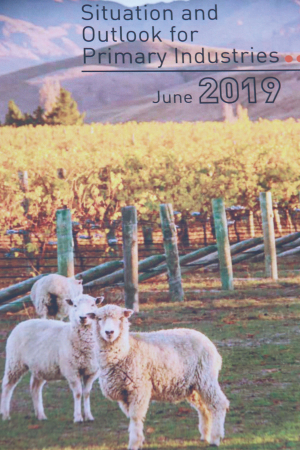 The report shows that all the primary sectors are performing well.

Against the odds, exports of NZ’s primary produce have increased by $7.5 billion over the last two years and now stand at $45.7b for the year ended June 2019.

So says the Ministry for Primary Industry in its latest Situation and Outlook Report (SOPI) released last week at Fieldays. Peter Burke reports.

The report shows that all the primary sectors are performing well.

But, predictably, it’s horticulture that is growing faster in export dollars than all other sectors. It will hit $6.1b – an increase of 13.7% on the previous year.

Kiwifruit and wine are the two biggest earners, collectively accounting for over half of total hort exports. But apples and pears, fresh and processed vegetables and other products are also making big movers on the export front.

MPI predicts that by 2023 export earnings from horticulture will be close to $7b.

MPI says the export performance by the NZ primary sector is all the more impressive considering the weakening global environment and uncertainty creating tension in international markets. Helping our performance is that the products we trade in are not, so far, directly affected and because the NZ$ continues to drop in value.

But the report warns that tough times are ahead for NZ. MPI expects this year’s boom to be followed by a ‘soft’ period in the following year, but picking up a bit in 2021. Slowing global economic growth, rising protectionism and what Brexit may cause are all uncertainties facing NZ exporters.

On Brexit, the report says “primary sector exporters should ensure they have contingency plans in place in case the UK leaves the EU after October without a deal”.

Horticulture breaks that cycle in the EU and UK, followed by Australia and the US as the top three markets, but China and Japan are rapidly catching up.

The MPI report looks at each part of the agricultural sector in some detail.

It notes that milk production was forecast to rise by 2.3% due mainly to favourable weather, but it predicts that next season production will remain static.

The report notes a slight drop (0.7%) in cow numbers and suggests this trend will continue and that increasing regulatory constraints will likely limit intensification of farming.

On meat and wool, the report says red meat prices have been strong for the last two years. But while beef prices for the coming two years will hold at about their present level, lamb prices will suffer a hiccup next season and not recover over the next four years.