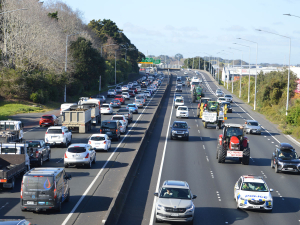 Protestors headed towards the Auckland CBD in one of a series of protests organised by Groundswell NZ.

“The sentiment behind them doesn’t represent the whole sector and undermines the hard work of so many farmers who are keen to get ahead of the curve,” he wrote.

McAnulty, who is MP for Wairarapa and the Labour Party’s chief whip, wrote that the Government recognised that the pace of change was concerning for farmers.

“The Government hears that and has shown a willingness to amend things in order to make it work. We will continue to do so.”

He said he was concerned that someone would do or say something to hurt the image of farmers and how those overseas view New Zealand.

“They will look at our protests and wonder why we are opposing proposals that aren’t as harsh as those they have in their own countries. These are the very same people in the very same markets we want to sell more of our products to.”

“I will continue to back the majority of farmers who want the best price for their products, the best for the environment and the best for our country.”