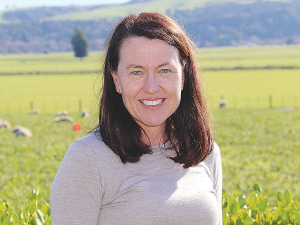 Karen Williams wants to help create an environment where farmers feel proud about the fact that they are producing quality food and fibre.

Karen Williams and her husband Mick run a 224-hectare arable and sheep and beef finishing farm near Gladstone in the Wairarapa. They grow barley for malting and feed, wheat for feed and milling, as well as produce ryegrass and clover seed. They are also trialling Durum wheat, which is used for making pasta and pizza bases.

Williams says over the last few years some farmers have been embarrassed to admit they are farmers and she wants this to change. She wants to build a strong team culture within Feds and the whole primary sector to create an environment in which farmers feel proud about the fact that they are producing quality food and fibre.

“We have a massive opportunity coming out of Covid to show that what we do is a really honourable job,” she told Rural News. “For generations, people have not worried about where their food comes from, but during Covid with some food shortages, the production systems that sit behind the supermarkets came to the fore.

“I want our consumers to understand more about how their food is produced and who are the people that do it for them.”

Williams doesn’t subscribe to the rural-urban divide saying it’s just something drummed up in the media and by certain people whose views suit this particular rhetoric.

She says Feds needs to play a constructive and helpful leadership role in the primary sector – especially in the area of sustainable farming.

Williams says this includes social issues such as looking after staff and positive relationships with our stakeholders. She believes there is a strong and dynamic board and staff who want to see a progressive and engaging federation.

“We shouldn’t just criticise polices for the sake of it, we should look for the merits and then point out the flaws. We do need to call out bad policy.”

Williams says one of the issues facing Federated Farmers is falling membership – something that has been happening for many years. She would like the organisation to take a broad-church approach to attract more members in areas such as alternative farming – including organics. She would also like to see more women involved in Feds leadership.

“There seems to be an invisible barrier and I am not sure whether it is the juggling of family responsibilities, but I want to do more work in this space,” she says.

“We also need to capture young people as they exit Young Farmers clubs and show them we have a home for them and that we value them.”

Williams believes Feds also must put more time into Maori farming entities and explore what a more effective partnership would look like.