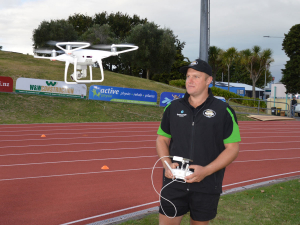 Alex Field, 25, took out the title after winning the fiercely-contested regional final in Whanganui on Saturday night.

“I’m speechless. I think it’s going to take a few days for the win to sink in,” he said.

“I was pretty anxious during the awards ceremony because I didn’t know which way the result would go.”

The event saw seven finalists tackle a series of gruelling modules, including a fast-paced agri-knowledge quiz.

Contestants had to fly a drone, use GPS technology to help set up a temporary electric fence and make butter.

“There was a refreshing mix of modules. This was my first time using a drone,” said Alex.

The prestigious contest has undergone a major overhaul since marking its 50th anniversary in Invercargill last year.

“We’re now showcasing all aspects of what it means to be a modern food producer,” said Te Radar.

It was Alex’s second attempt at taking out a regional final.

His win has secured him a spot in the FMG Young Farmer of the Year Grand Final in Hawke’s Bay in July.

“It’s been a long-held dream of mine to compete in the grand final. I’m excited about being a part of this year’s event,” said Alex.

The Marton Young Farmers vice-chair was named the most tech-savvy contestant and took out the award for outstanding leadership.

Alex is a stock manager on a 1000 hectare coastal property at Turakina, south of Whanganui.

It’s owned by the Redmayne family and is the home of Coastal Spring Lamb.

“The farm runs 3200 Romney breeding ewes, which start lambing in June. It also has 310 Angus breeding cows,” he said.

Alex has a Certificate in Agriculture and a Diploma in Rural Business from Telford.

The Young Farmer of the Year is an iconic contest which began in 1969 and showcases the country’s agri-food sector.

A mate of the Hound reckons the outcome of this year’s Young Farmer of the Year contest should be a real concern to New Zealand’s Young Farmers and the annual competition itself.