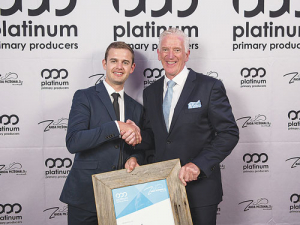 The first student to have won a NZ Agricultural Fieldays Sir Don Llewellyn Scholarship is now working in the flourishing sheep milk industry, one he says is growing fast into a viable new industry for NZ.

The scholarship is awarded each year to graduate students doing specific research in agriculture at Waikato.

Macdonald studied agribusiness at Waikato and his post-graduate research looked at the cost of environmental compliance in a range of farming systems – which contributed to informing the conversation around future regulation and policy.

“It looked at how farmers can shift their farm system to meet the new requirements and it bridged the gap between the regulator, i.e. the council, and the farmer and put solid information out there on what farmers had actually spent,” Macdonald told Dairy News.

He surveyed about 50 farmers and got real data that was then published to inform the discussion about what farmers had already committed to the cause.

He looked at the efficiencies, or otherwise, of a farmer becoming compliant with new effluent and nitrogen leaching requirements. The work showed, basically, that a “sweet spot” exists at either end of the farming systems model where a farmer makes enough money to cover respective compliance costs.

“There is no point in having high pollution and then not making enough money to cover the cost of the pollution,” Macdonald says.

“The take-out message was ‘pick a system and stick to it’ at either end of the model; don’t be halfway there. There are options for reducing nitrate leaching exposure, including cow housing and destocking.”

Macdonald says the Sir Don Llewellyn Scholarship was the sole reason he stayed on to study; it made it viable.

When he left university he ran a group of five dairy farms for Landcorp on the Central Plateau.

Three years ago he joined the sheep milking industry and is now business manager for Spring Sheep Milk Company. He says progress has been “fantastic” and they are now in high growth mode.

“We have just been nominated for the NZ Export Awards at the front end of the business and we are growing the farming side with two new properties into sheep milking.”

NZ now has high-yielding dairy sheep, made possible through the importation of European dairy genomics.

The award, regarded as a badge of honour by the agribusiness industry, recognises innovative young agri professionals from both countries. It was launched in 2014 in memory of Australian beef industry leader Zanda McDonald, who died aged 41 after an accident at his Queensland property in 2013.

Now in its fourth year, the award is run by the Platinum Primary Producers (PPP) Group, a network of 150 of Australasia’s influential agribusiness men and women, of which Zanda McDonald was a foundation member.

Last year’s winner was Shannon Hunter, researching to establish whether the virus that causes root rot in NZ avocado orchards is developing resistance to phosphite, which is commonly used to treat dieback.

The scholarship was founded to assist students to do research at the University of Waikato with a specific focus on the agricultural sector.

The University of Waikato has a long association with the Fieldays: its founding vice-chancellor Sir Don Llewellyn helped with the event’s founding.