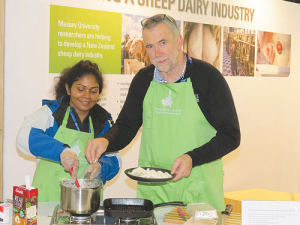 Prichard, known as a driver of the industry, says four years ago only four cheese makers attended; this year there were 16.

He says in four years the industry has moved from being “gee whizz isn’t that interesting” to a serious business with a future.

Prichard says sheep milking has made big strides in the last year, giving the industry confidence and attracting new producers.

He points to the importation of new genetics to increase milk production and the industry’s profile being boosted by a sheep cheese wining the top overall cheese award.

“We are moving into the next zone, which I would see as more sheep milk producers coming on in Waikato and South Waikato, working with two major companies – Spring Sheep Dairy and Maui Milk. This is a new era but not a boom-or-bust situation.

“People are making careful decisions to engage with a new potential sector. What’s important to notice
now is this interest is coming even when the cow milk price is relatively good and at the same time as lamb and beef prices are also relatively good.”

Prichard says people are seeing the sheep milk industry as a viable form of diversification – a way of expanding their business portfolio. They are seeing the returns and recognising the shift taking place and want to be a part of it.

Big growth is visible: one company grew 400% last year. New large producers are entering the industry – people with flocks of 300 to
400 sheep.

“They are not lifestylers; these are trying to make a business producing sheep milk. We are in a whole different space from what we used to be.”

Craig Prichard notes the research work AgResearch is doing as part of an MBIE project.

This research will help drive the direction of the sector and, in particular, the health benefits of sheep milk and its associated products, he says.

And research into sheep milking’s environmental benefits will also give it a push. Long-term research is aimed at getting definitive results on nitrogen loading and leaching, and results from looking at all sorts of feed crops.

“There are good stories coming through on the environmental side,” he says.

Prichard hopes that in the next couple of years New Zealanders start to realise that sheep cheese is an important part of our cheese diet. Sheep cheese makers are keen to contest awards and this will help lift the profile of the sector.

“I am hoping some established cheese makers will get involved.

“Even Fonterra -- God forbid -- may take an interest in doing something interesting with sheep milk and producing a distinctive sheep cheese from different regions that will stand up in the international market,” Prichard says.