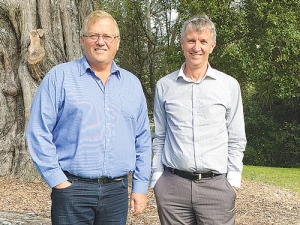 Former Fonterra directors Colin Armer and Greg Gent who are putting up a remit at the co-op’s AGM to revamp its board.

Former Fonterra directors Greg Gent and Colin Armer are banking on the "silent majority" of co-op shareholders in their quest to revamp the board.

Armer, a corporate farmer, and Gent, a respected company director, have put a remit before next week's annual meeting.

They want shareholders to vote for a reduction in the size of the board, currently 13 directors – nine elected and four appointed.

But Fonterra's board and the Shareholders Council have rejected the motion.

He says the Shareholders Council's comment that even if shareholders voted in favour of the proposal their vote would not count was at best wrong. "The shareholders' council cannot disenfranchise shareholders," Gent says.

Armer said that shareholders always have the right to change the constitution. "We own it and nobody can take that away from us – not even the shareholders council.

"Things are pretty tough for all of us at the moment. I believe it is imperative we don't waste any more time on this and that we make a positive change by telling the board to get on with the job.

"Directors don't like voting themselves out of jobs so they are not going to hurry up and do it. That's why we shareholders are going to have to do it for them."

Armer says 50% of the company's shareholders usually do not vote in company affairs; this is the group he is calling on to support to the proposal.

"The silent majority holds the key to this. The board and council have failed to trust their shareholders' voice on this issue but we believe our fellow shareholders hold the key," says Armer. "They just need to make sure they exercise their vote in greater numbers.

"Our proposal poses no risk to the cooperative, gets the most important change done quickly, fairly and efficiently, and will ensure we get a board that can get on with the job of building our company into a cooperative we can all be proud to be part of."

They say accountability for the performance of the company begins at the top.

"A meaningful reduction in the size of the board will improve board efficiency and decisionmaking. A smaller board will give greater clarity to our cooperative's strategic direction for the future."

Fonterra chairman John Wilson will miss out on a pay rise this year if a recommendation is accepted at the co-op's annual meeting next week.

Fonterra Shareholders Council members will also miss out on a raise.

Fonterra's annual meeting will be held at its Waitoa plant on Wednesday November 25.