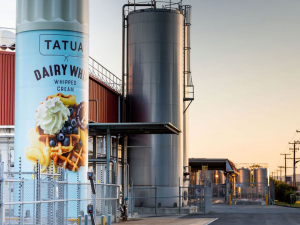 Ross Townshend, an independent director of Tatua since 2009 and a former agribusiness leader, is no longer on the board, chairman Steve Allen confirmed today.

Allen says he will be contacting Mahuta’s office “to provide an explanation and a personal apology”.

In a Facebook post made on November 9, Townshend makes disparaging remarks about Mahuta’s traditional tattoo (moko) and how it may be perceived during her 17-day overseas trip that began last Thursday.

Mahuta was in Australia last week. She is also visiting Indonesia, the United Arab Emirates (UAE), Qatar, the US and Canada.

In UAE she will support New Zealand's exhibition at Expo 2020 and host the festival of indigenous and tribal ideas Te Aratini.

Mahuta, the MP for Hauraki-Waikato and the Minister of Local Government, is also spearheading the Three Waters reforms that is facing a public backlash.

Townshend is a former executive of the NZ Dairy Group and held international senior executive positions within the meat, packaging, food and wool industries. He is a food technologist by background.

One of his Facebook posts says he was the co-ordinator of the Groundswell protest in July this year.

Allen says on Monday evening, Townshend’s “highly inappropriate messaging on social media in relation to a Minister of Parliament” was brought to his attention.

“Mr Townshend’s personal views and the way he chose to express them are incompatible with Tatua’s culture and values.

“Therefore, his actions left me with no other course of action than to accept his resignation on behalf of the Tatua board of directors.”

Allen says over the 25 years that he has been involved as a director of Tatua, including 18 years as chairman, the company has had mutually respectful and warm relationships with ministers and government officials of all parties.

“We also have incredibly good and long-standing relationships with our community, including local iwi.

“An incident of such offensive disrespect is simply not who we are,” says Allen.

A loss to the Tatua family

It is with great sadness that we acknowledge and pay tribute to our dear friend and colleague John Luxton upon his passing on 16 November 2021.

OPINION: This old mutt reckons (un) social media is just an echo chamber of self-important, self-professed experts who lecture and pontificate to all and sundry about their self-important views.

Waikato milk processor Tatua says keeping products moving to overseas customers during the pandemic was one of the highlights of its last financial year.