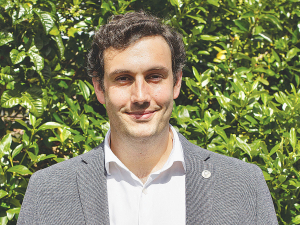 Kit Arkwright reckons he has landed the best job in the agriculture sector.

He says not only will he be leading a talented team, but that his job will be promoting the best food known to mankind - NZ grass-fed beef and lamb.

"It doesn't get any better than that," Arkwright told Rural News. "Maybe I'm a bit biased but I really think that I have landed the best job in NZ agriculture."

Arkwright joined Beef + Lamb four years ago and held the role of general manager of marketing. In June, following the retirement of Rod Slater, he has been acting in the top job.

Arkwright describes his predecessor as "a titan of the industry".

He says Slater has been a champion for the sector with many successes, including the Iron Maiden campaign involving some of NZ's top athletes and the Quality Mark assurance accreditation for products.

Arkwright says he has "massive shoes to fill" but has absorbed wisdom and insights working with the industry veteran for the past four years.

“I will be using the blueprint that he has left behind for me,” he says.

Arkwright concedes that that there are challenges facing the sector.

He says consumers are looking for information about the food they eat – how it’s produced, its environmental footprint and animal welfare standards employed by farmers.

“But we also know roughly 9 out of every 10 Kiwi households are tucking into delicious, succulent, juicy, flavoursome, New Zealand-produced, grassfed beef and lamb,” he says.

“And what’s more, they love it. They like eating beef and lamb, they like cooking with it and when they eat it, they feel good about how it fuels their body.”

Arkwright says there is much to be optimistic about and he looks forward to what the future holds.

Plant-based alternatives are something B+LNZ is watching.

“We are keeping an eye on it as an industry. In my view it is extending its elbows and trying to muscle in,” Arkwright says.

“We hear of a huge increase in sales of plantbased protein, but they are starting from a very low base, making these increases look dramatic.”

Arkwright believes there will be a place for such alternatives, but consumers will always look for food “closest to being natural whole food, full of nutrients”.

Announcing the appointment, B+LNZ chair Fred Hellaby says during his time with the organisation, Arkwright has demonstrated his understanding of the industry and his creative approach to advancing its position in the minds of consumers.

“I look forward to working with Kit and his team as we mark a new era for Beef + Lamb New Zealand,” says Hellaby.

For his part, Arkwright is looking forward to working with farmers.

“One of the best parts of the job is meeting farmers and seeing the passion they bring to farming,” he says. “They are an integral part. Without them the rest of the value chain no longer exists.”