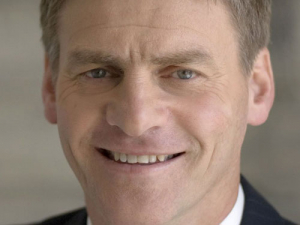 An up: Bill English.

Zespri and its chief executive Lain Jager: the best-run business in the NZ primary sector by a country mile and still climbing to new heights. The kiwifruit sector is an industry that works together and succeeds together. Jager will be a big loss when he steps down next year.

Lewis Road Creamery and its founder Peter Cullinane: for showing the value of smart thinking, great branding, marketing, technology and combining all this to produce some amazing, exciting new foods.

KPMG’s Ian Proudfoot: for great leadership and trying to prise the primary sector away from the old world and into the new.

The Irish: for beating the All Blacks and getting the jump on us in developing the best green brand in the world – Origen Green. Also for showing the NZ science and innovation sector how putting up serious money encourages young people into agriculture. We talk, they do.

Massey University: for resuming its focus as an agricultural university and getting rid of fringe, fluffy stuff that’s diluted its agricultural image.

Landcorp: for persisting with its Pamu brand and putting high value products on the radar, and for modelling the use of technology onfarm.

Fed Farmers: for its response to the Kaikoura quake, with Katie Milne and Lynda Murchison leading the charge brilliantly in dealing with out-of-touch townie Civil Defence bods.

Rural News Group: for its initiative in organising teacher and student trips to farms and universities to encourage more young people into agriculture. Too many others in the primary sector are missing-in-action on this.

The dairy sector: all dairy companies have lifted their payout forecasts for 2015-16 in a further sign of a rebound in global milk prices. After two seasons of tough times, dairy farmers will be looking forward to making a profit again.

Beef + Lamb NZ: for shifting the direction of their marketing activities to new and emerging markets and leaving the established ones to meat companies. And for getting the industry to actually agree on something.

Silver Fern Farm shareholders: for voting overwhelmingly (twice) for the Shanghai Maling deal. Mind you, if you are faced with full ownership of a failing company or half ownership of a company with new investment and access to a one billion-plus market, it’s a no brainer.

Bill English: started the year facing a tough economic outlook as finance minister because of the dairy downturn, and ended the year with record surpluses lining up into the future and a new job as Prime Minister.

Lincoln University: having to sell or lease some farms and shed more staff as it struggles to correct a funding shortfall after recording a $6 million deficit last year. It’s also indicated it may have to stop training at its Telford campus. Newly installed chancellor Robin Pollard has a tough job ahead.

Greenpeace: if the multi-national lobby group was not accusing Fonterra of single-handedly destroying the planet by its farmers using PKE, it was accusing the Government and irrigators of polluting every waterway in New Zealand.

Leader ex-Green Party chief Russel Norman has taken his anti-farming political stance from Parliament to the environmental lobby, showing that it’s time for Greenpeace’s non tax-paying status to be seriously looked at.

MIE: the meat industry ginger group finally went down the offal pit this year after treading water and achieving nothing. Started strongly, but soon burnt farmer and political support with its cantankerous attitude and myopic world view. Will not be missed.

All the political and economic doomsayers: for predicting the end of the dairy sector’s contribution to the NZ economy; interestingly they all seem to have vanished in recent months as the forecast dairy payout heads north of $6.40 and looks to keep on rising.

The meat industry: for not predicting the Brexit or Trump vote, which could heavily disrupt markets. Mind you, they shared that with world media, pollsters and commentators. Anyway, if they had predicted it no one would have believed them.

The wool industry: for taking such a low profile this year that even the primary sector started to forget it exists. There were hints at innovation, followed by nothing.

Outstanding in their field

The farming and rural folk of North Canterbury and Kaikoura hit by a whopping earthquake in November and enduring many aftershocks since. Despite many having homes, milking and woolsheds out of action they have rallied around their communities, supported each other and kept farming as best they could.

MPI and others win the asleep-at-the-wheel award for 2016. They are finally working on ‘project green’ just 14 years after the Irish started up Origen Green. Such timing and speed… wow.

Up the Kreik without a paddle. Hans and his vegan mates who kept up their attacks on the life-blood of the NZ economy to satisfy their publicity-addled egos. Should get real jobs instead of chipping away at NZ’s image and economic prosperity.

Best event in the primary sector: hard to go past the Ahuwhenua Trophy Awards, which attracts about 900 people for the dinner. Brilliant show and great finalists.

Ballance Farm Environment Awards: a truly national and regional competition that showcases the best farmers making it financially and environmentally. Truly a win-win for the agricultural sector.

Mike Petersen: NZ’s special agricultural trade envoy. Relentlessly positive about NZ agriculture and the benefit to NZ of freer international trade. Despite the setback of Brexit and the TPP not being implemented he remains positive and future-focussed. A great communicator and excellent ambassador for rural NZ.

Nathan Penny: the ASB rural economist who picked the dairy upturn long before others and held firm on a payout of $6 for coming year.

John Key: like him or not, Key led the country for eight years, remained personally popular, kept National high in the polls, won three elections on the trot and retired on his own terms. Few politicians have done that.